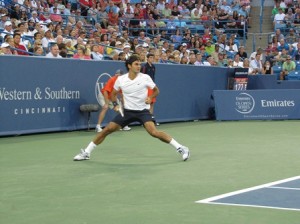 MASON, Ohio – Roger Federer gave Mardy Fish one racket-clap but not much else en route to a 6-3, 7-6 (4) victory in the quarterfinals of the Western & Southern Open on Friday. Federer, four times a champion of this event, has faced a different semi-final opponent every time he has reached that round, and this year is no different. Across the net on Saturday he will see friend and fellow Swiss Stan Wawrinka, a winner over Milos Raonic of Canada. 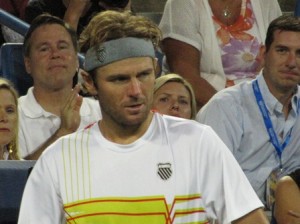 Fish picked up his game in the second set, earning the familiar â€œtoo goodâ€ gesture from Federer for a dipping cross-court passing shot. As Fish hung tough, the Lindner Family Tennis Centerâ€™s full house rewarded him with effusive support. No doubt many in the audience remembered that the World No. 20 had stretched Federer to three sets in the 2010 final, and were hoping their baseline slugfest could extend longer into the gorgeously clear and cool Midwestern night.Â  It looked like they might get their wish as the pair matched strength with strength. Federer unfurled a dainty drop shot at 2-2. Fish boomed a 133 mph serve up the middle in the next game. But the Swissâ€™s mix proved superior to Fishâ€™s fight, and Federer closed out the match with an overhead on this third match point

â€œIt was a great atmosphere,â€ Federer said. â€œPlaying an American here in America, itâ€™s always special.â€Â  Heâ€™s happy with his adjustment to this eventâ€™s surface and balls just two weeks removed from playing on the Olympic grass. â€œThe bounce is completely different here than at Wimbledon,â€ he said.

After the Wimbledon champ improved to 8-1 against Fish, he was asked about the state of his career-defining rivalry, with Rafael Nadal. He couldnâ€™t remember exactly the last time they played (â€œIndian Wells, maybe?â€), but heâ€™s sure it wasnâ€™t their final meeting. â€œI havenâ€™t thought about it, that I might play Rafa less,â€ he said. â€œOne time one top guy misses one major, I think some make a big deal out of it. Itâ€™s true that itâ€™s a big shock, but it does happen from time to time.â€

Novak Djokovic tends to move quietly through the draw in Cincinnati every year, and for the third time he has reached the semi-final without dropping a setâ€”although thanks to a first-round bye and a second-round retirement by his opponent, Nikolay Davykenko of Russia, Djokovic has played only three sets this week. Today, he defeated Croatiaâ€™s Marin Cilic 6-3, 6-2 and earned chance to avenge his loss to Juan Martin del Potro of Argentina in the bronze-medal match at the Olympicsâ€”though he says revenge isnâ€™t on his mind.

â€œI already put it aside,â€ the Serbian said. â€œAs a tennis player, you have to do that.â€

Del Potro defeated Jeremy Chardy of France, 6-1, 6-3, and Wawrinka came back from a one-set deficit to stop Raonic from reaching his first Masters 1000 semi-final. The Swiss No. 2, who won today 2-6, 7-6, 6-4, has struggled since his tough five-set loss to Jo-Wilfried Tsonga at the French Open. â€œIt was not easy,â€ Wawrinka said, â€œbut Iâ€™m really happy to be back on the hard court. Since the beginning o of the tournament, Iâ€™m focused on what Iâ€™m doing.â€ 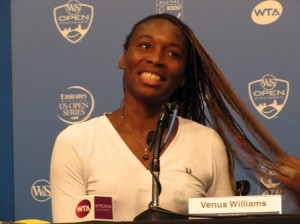 Venus Williams reached her first semi-final in two years by defeating Australian Sam Stosur 6-2, 6-7, 6-4, sealing victory with a pair of service winners and booking a match with Chinaâ€™s Li Na, who took advantage of Agniezska Radwanskaâ€™s sore shoulder and rare inconsistency to notch an easy 6-1, 6-1 win.
In the other semi-final, the Czech Republicâ€™s Petra Kvitova posted a 6-4, 7-5 (4) win over Anastasia Pavlyunchenkova of Russia.
Almost giddy in her post-match press conference, Williams happily talked about everything from cornbread (â€œIâ€™m probably going to throw some eggs in thereâ€) to karaoke (nearly an addiction) to candy (something sheâ€™s given up to deal with Sjogrenâ€™s Syndrome). Little did she know that here sister, Serena Williams, was struggling against Angelique Kerber just outside the building on Center Court. Mere minutes after the elder Williams opined that her sister needed some rest, she was proven right: Kerber took a 6-4, 6-4 victory from the hottest player on the WTA Tour, ending her opponentâ€™s 19-match winning streak. 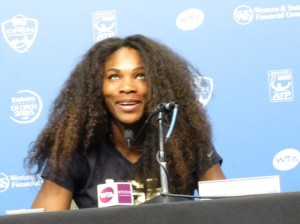 â€œToday was one of my biggest wins in my career, for sure,â€ says the world No. 7, who had now defeated both Williams sister in a span of three weeks. â€œI go out there not thinking that itâ€™s Serena on the other side.â€

But Kerberâ€™s work wasnâ€™t done for the day when she aced Williams on match point. As the tournamentâ€™s WTA blogger for the week, she had Fridayâ€™s column to write. Find it on www.cincytennis.com and see if she put as fine an end on her commentary as she did her match.

Megan Fernandez is covering the Western & Southern Open in Mason, Ohio for Tennis Panorama News. Follow her updates on twitter at @TennisNewsTPN.

All photos by Â© Enrique Fernandez for Tennis Panorama.