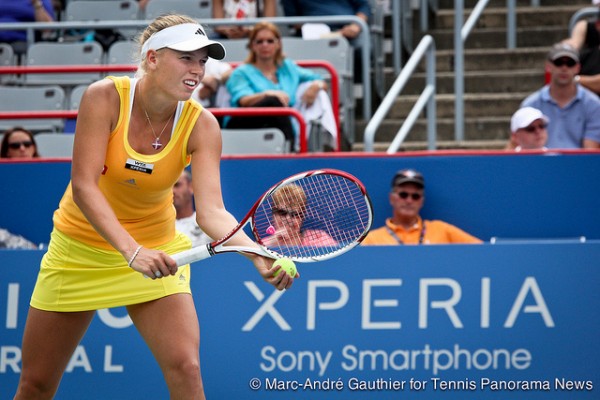 NEW HAVEN – For the fifteenth straight year, several of the top Womenâ€™s Tennis Association professionals will be at the Connecticut Tennis Center in New Haven the week prior to the U.S. Open.Â  And defending New Haven Open champion, Caroline Wozniacki from Denmark, hopes to be holding the winnerâ€™s trophy for the fifth straight time.Â  As always, the path to the title has a lot of obstacles, with eight of the Top Twenty ranked women entered in the draw.

When Wozniacki defended her title last year, she was holding seven other tournament titles and ranked No. 1 in the world.Â  Her form has dropped off in the last 12 months; sheâ€™s been unable to win a title since the 2011 New Haven Open.Â  As a result, her ranking has dropped to No. 8, and sheâ€™s seeded third.Â  But Wozniacki still has to be considered a title contender.Â  She holds a perfect 17-0 record at the event, and nine of those wins have come against opponents ranked in the Top Twenty.Â  Is that enough to snap a streak of twenty straight events that Wozniacki has lost? She will make history if she can win her fifth title; only three other women in tour history have won an event in five consecutive years, Chris Evert (Charleston), Steffi Graf (Hamburg), and Martina Navratilova (Wimbledon, Eastbourne, and Chicago).

The top seed at the 2012 New Haven Open is Agnieszka Radwanska of Poland.Â  Radwanska had her best career result just a few weeks ago, reaching the finals of Wimbledon before losing to Serena Williams in three sets.Â  Sheâ€™s improved her world ranking to No. 3 on the strength of five titles in the last 12 months, including three Premiere events (Miami, Tokyo, and Beijing).

The hottest player coming into this yearâ€™s event is Petra Kvitova of the Czech Republic.Â  She is the only woman who has reached the quarterfinals at each of the 2012 Grand Slam events.Â  More recently, she won the Canadian Open in Montreal last week, and reached the semifinals in Cincinnati this week.Â  But on the downside, thatâ€™s a lot of tennis for Kvitova, and she could be feeling the effects here.

Rounding out the Top Four seeds in New Haven is the Italian who made a surprise run to the French Open final a few months ago, Sara Errani.Â  Since moving off of clay courts, Errani has found things more difficult, winning only four matches on grass courts or hard courts since June.Â  She has been able to show winning form on hard courts earlier this year, reaching the quarterfinals of the Australian Open.

In looking at title contenders, recent history in New Haven shows that you must look past the seeded players.Â  While the first nine New Haven finals did not feature an unseeded player, there has been an unseeded surprise finalist in four of the last five years.Â  Some names who could continue that trend in 2012 include Andrea Petkovic, Sloane Stephens, and Laura Robson.Â  Petkovic, the entertaining German player, reached No. 9 in the world last year, but has played only a few events this year because of injury.Â  New Haven marks her return to the tour after a four month absence.Â  Stephens, from the United States, has made her breakthrough this year reaching the fourth round of the French Open.Â  She is also the youngest player ranked in the Top 50, at age 19. Robson is even younger, at 18, and is coming off a silver medal win in the London 2012 Summer Olympics, where she partnered with Andy Murray in Mixed Doubles.

Itâ€™s a difficult field to handicap, but one thing is for sure: whoever is holding the trophy next Saturday will have a great chance of making a run at the U.S. Open title as well.Â  In the last fourteen years, the New Haven champion has reached at least the semifinals on ten occasions.

Around the Grounds â€“ Saturday August 18th: Nicole Gibbs, the Stanford sophomore who swept the NCAA singles and doubles title this year, defeated her first Top 100 opponent Saturday, dispatching No. 77 Lourdes Dominguez-Lino of Spain in the second round of qualifyingâ€¦ Melanie Oudin, the surprise 2009 U.S. pen quarterfinalist, continued her comeback by ousting Silvia Soler-Espinosa in three sets.Â  After her win, Oudin confirmed that she and Jack Sock would be attempting to defend their 2011 U.S. Open Mixed Doubles titleâ€¦ Andrea Petkovic isnâ€™t the only player on the comeback trail at New Haven; 2007 runner-up Agnes Szavay of Hungary is playing in her first WTA main draw of 2012. Szavay also played in The London Summer Olympics this month as she returns from a career-threatening back injury.