Summaries of Sundayâ€™s first round action at the Connecticut Tennis Center in New Haven: 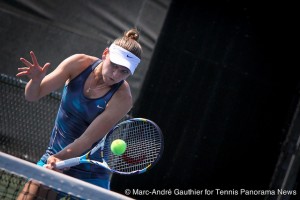 Lucie Safarova enters New Haven at a career high world ranking of No.19, and a successful run to the semifinals of Montreal two weeks ago.Â  Her opponent has also found success this year. Varvara Lepchenko, born in Uzbekistan but now an American citizen, reached the fourth round of the French Open by defeating former champion Francesca Schiavone.Â  This had the makings of a competitive match in the early going, but Safarovaâ€™s service returns made the difference.Â  The Czech was able to break Lepchenko for a 4-2 lead in the first set, and never looked back.Â  After holding serve to close out the first set, Safarova broke Lepchenko in the opening game of the second set.

Lepchenko was fighting another opponent on court today: her injured left wrist. She later explained that her wrist had been bothering her, and she was unwilling to risk further damage by continuing to play. A medical timeout by Lepchenko at 1-2 in the second set couldnâ€™t alleviate the problem, and she retired two games later. Lepchenko, a U.S. representative at the 2012 Summer Olympics earlier this month, is hopeful that MRIs wonâ€™t reveal significant problems and she will be ready to play at the U.S. Open in New York next week.

Safarova provided a candid self-assessment after the match, explaining her lack of consistency is what has held her back throughout her career. While sheâ€™s improved her play this year, sheâ€™s performed poorly at the Grand Slam events.Â  The eighth seed is hoping her form today continues this week and into the U.S. Open.

This result qualified as an upset, as No. 49 Sloane Stephens knocked out No. 36 Tamira Paszek, but most of Paszekâ€™s success this year has come on grass courts.Â  Stephens, on the other hand, has had a very balanced year finding success on all surfaces.Â  Nineteen-year-old Stephens, the youngest player ranked in the Top Fifty, showed a versatile mix of offense and defense, and jumped out to the early lead in both sets.Â  Meanwhile, Paszek endured the kind of day that saw her dump an easy overhead into the net and serve two double faults at key moments in the match.

Stephensâ€™ game has a lot of easy power, which kept her opponent on the defensive for much of the match.Â  Stephens also dominated on her serve; in the second set she fired two aces and dropped only seven points in four service games, cruising to the 6-3, 6-1 victory.Â  As she continues to improve, the Florida native acknowledged that sheâ€™s had to change her goals for the season as sheâ€™s achieved several during the course of the year.Â  But when pressed for specifics on her goals, she remained mum. â€œI canâ€™t tell you. Itâ€™s a secret. Youâ€™ll see one day when we get there.â€Â  The personable American deflects the pressure of being considered the next U.S. tennis hope. â€œIâ€™m doing the best I can do, and thatâ€™s all that really matters.â€

Stephensâ€™ search for a U.S. Open Mixed Doubles partner continues. When asked if she had located a partner yet: â€œNone. None. This one guy was like â€˜Hmm, well, Iâ€™m going to wait until next week (to decide).â€™ What the heck? I still have no one but itâ€™s OK. If I donâ€™t play mixed doubles itâ€™s not the end of the world.â€â€¦ Marion Bartoli of France, seeded fifth at the New Haven Open, survived twelve double faults and blew a 4-0 lead in the second set, but she held on for a 6-3, 6-3 win over Laura Robson of Great Britainâ€¦ Agnes Szavay, the 2007 New Haven finalist is currently unranked having been off the tour much of the last two years with a back injury.Â  She managed to push No. 42 Carla Suarez Navarro to a first set tiebreaker, but with Szavay serving at 3-4 in the tiebreaker, she thought her opponentâ€™s shot sailed wide. The linesperson and chair umpire Lynn Welch disagreed, despite Szavayâ€™s pleas.Â  Suarez Navarro swept the rest of the tiebreaker, and the match, 7-6 (3), 6-4.