You are here: Home / Contributors / Kvitova Holds On To Take Her First New Haven Open Championship

Summary of Saturdayâ€™s Finals at the Connecticut Tennis Center in New Haven: 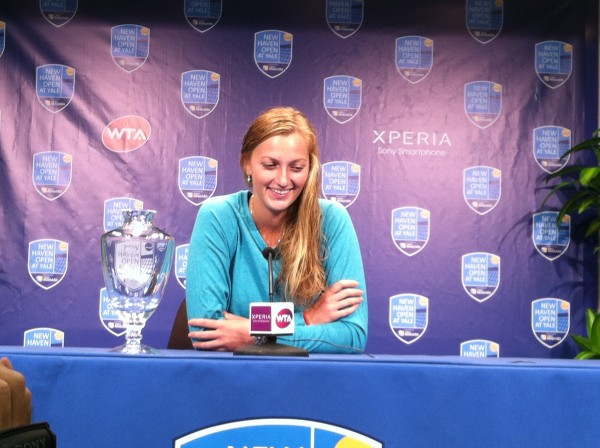 The New Haven fans got their moneyâ€™s worth in the final, as Petra Kvitova snuck past Maria Kirilenko in a closely contested match. Â With both players holding set points in both sets, the match truly could have gone either way.

The finalists exchanged four service breaks within the opening six games of the match until they settled in at 3-3.Â  Nerves got the best of Kirilenko, and at 5-5, 30-30, she served two double faults that allowed Kvitova to serve for the first set.Â  However Kvitova returned the favor with her own double fault to hand the service break back, and the set headed into a tiebreaker.Â  The tiebreaker was a see-saw battle, with six different set points in total.Â  Kirilenkoâ€™s final backhand pass attempt went slightly wide, and Kvitova captured the opening set, 11-9 in the tiebreaker. 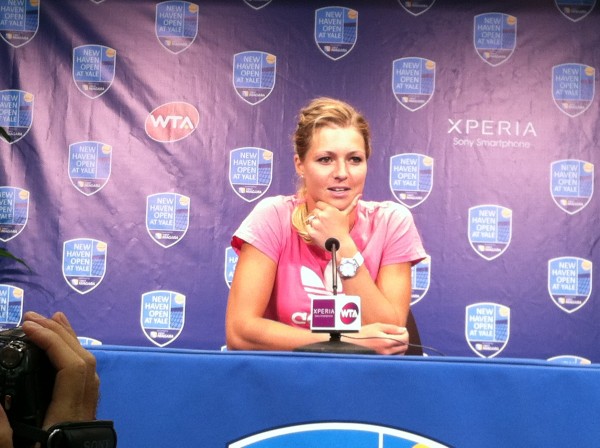 As the second set got underway, it was a very different contest.Â  There was a noticeable dip in energy, particularly from Kvitova.Â  After the match, the Czech noted â€œI was really down physically. I felt like without energy.â€Â  Kirilenko capitalized on this lull in the action. With Kvitova serving 2-2, 40-40, the Russian swept the next eleven points to grab a 5-2 advantage.Â  Kirilenko served for the set twice, at 5-2 and again at 5-4, but could not convert.Â  The momentum had shifted back to Kvitova.Â  Sweeping the last five games, Kvitova earned her second hard court title of the summer, and positioned herself as a top contender for the U.S. Open.

After starting the season winning four of their first six events, the American pair of Liezel Huber and Lisa Raymond were stuck in a twelve event losing streak, a disappointing statistic for the co-No. 1 ranked doubles players.Â  They made the last minute decision to join the New Haven Open field after an early round loss in Cincinnati.

These two teams last met during that losing streak, on the grass of Wimbledon in the semifinals of the 2012 London Summer Olympics.Â  The Czech duo of Andrea Hlavackova and Lucie Hradecka won that match in straight sets. Â Although they were the lower seeded team in the New Haven final, there was no doubt they were capable of winning the Championship.Â  A break of serve from the No. 2 seeds allowed them to serve out the opening set 6-4, halfway to the title.

Itâ€™s sometimes said, â€œthe match was closer than the score indicated,â€ and that was certainly true in the second set.Â  While the 6-0 set appeared one-sided, each game reached deuce.Â  Inspired play from Huber and Raymond saw them win the seventh point in every game.Â  (With Doubles using no-ad scoring, a seventh point is played at 40-40 to determine the winner of the game.)Â  The shutout set gave Huber and Raymond the confidence to capture the third set super-tiebreak. Â The American team jumped to a quick 5-1 lead, and closed out the match for their first title since March.

During Petra Kvitovaâ€™s on-court interview after winning the title, she confused several people in the crowd when thanking Tournament Director Anne Worcester for the â€œvodkaâ€.Â  She was actually thanking Worcester for the â€œwild cardâ€ entry into the event, but with her Czech accent it sounded differentlyâ€¦ Maria Kirilenkoâ€™s boyfriend Alex Ovechkin, a left wing for the NHLâ€™s Washington Capitals, appeared in her friendâ€™s box today.Â  At changeovers during the match, several fans ran over for autographs and pictures, which Ovechkin good-naturedly accommodatedâ€¦ In their post-match press conference, Lisa Raymond and Liezel Huber entertained.Â  Huber expounded on the convenience of renting an apartment during the two weeks of a Grand Slam event, describing herself as a â€œlaundry freakâ€ who was planning to do her own laundry and cooking at her rented New York apartment starting this evening.Â  And when Raymond was told that her 79 doubles titles placed her ahead of Roger Federer for titles, she exclaimed: â€œThatâ€™s the best stat Iâ€™ve heard all day!â€