You are here: Home / Features / A New “Sunshine” – Victoria Duval 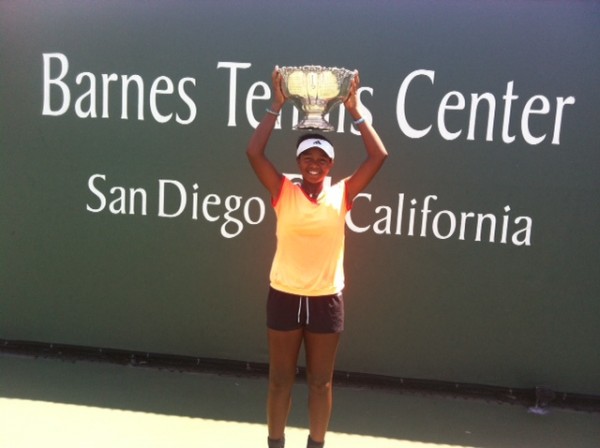 FLUSHING MEADOWS, NY – Tennis may already have a player with the nickname “sunshine” in Denmark’s Caroline Wozniacki, but in Arthur Ashe Stadium on Monday night a 16-year-old wild card entrant from Florida may be taking that “sunshine” nick name away from the Dane. Meet the US National 18 and under champion and Florida native Victoria Duval. She was a hit with both the public and media at the US Open despite losing to 25th seed Kim Clijsters 6-3, 6-1.

The charming, high-pitched teenager ranked 562 in the world welcomed the fact that she drew Clijsters, one of her idols in the first round. I felt like one of the luckiest 16-year-olds ever,â€ said Duval. To play Clijsters in her last tournament, it was exciting.â€

It was like history repeating, when Clijsters was 16, she played Steffi Graf in the German’s last tournament. “She told me that walking out to the court,”Duval noted.

“I had moments when I was younger when I played Steffi (Graf) at Wimbledon and she was my big idol,” Clijsters said. â€œSo it kind of takes you back through a lot of emotions and memories.

“It was nice in a way to get a feeling of the atmosphere from her side. I just told her that we’ve all been there, and it’s great to have these opportunities. We spoke a bit after the match. She was really sweet. I think she has a good game to be out there.”

“I was saying that I couldn’t even sleep I was so excited, so she (Clijsters) said ˜I know how you feel.”

From the moment she stepped on court, the New York crowd was supporting the teenager and loudly cheered her on, for every point and game she won. It was the Floridian of Haitian descent’s first-ever tour-level main draw match.

“Indescribable feeling,” was Duval’s reaction in regard to 23,000 fans supporting her, “it was much more than I expected. The whole atmosphere was just incredible.”

“I was really nervous. But I thought I did a good job of not showing it.”

“What surprised me was the crowd, it was a different experience when you are hearing it on TV than when you are actually there. Having all those people behind me since the first game, it was incredible,” said the teenager with almost the sense of disbelief.

Duval actually had a 3-2 lead in the first set against Clijsters, “Walking to the chair, I was like, `I am actually up 3-2 right now!'” Duval said. “She definitely picked up her level a lot¦.she played like Kim Clijsters from that point on.”

Duvall”s engaging personality dismissed the struggles her family has had while living in Haiti. Although she was born in Florida, she grew up in Haiti where her parents are from. As a child, Duval and some of her cousins were taken hostage by robbers.

Her father also survived a 2010 earthquake in Haiti, in which he survived being buried under rubble and his legs were broken.

Her hardships have made her and her tennis stronger.

“It helped my tennis in the sense that in those circumstances, we were just saying, no matter how tough things get, you’re always going to get out of it.’ So in my tennis, that’s basically what I’ve been living by,”

“We were in the locker room and Kim asked to take a picture, just for her memory. I thought that was so nice cuz I was he one that should be begging her her for her picture.”

“She is definitely, you know, my idol, and that”s why it shows again why she”s a nice person.”

Duval”s other tennis idols include Venus and Serena Williams.

“I get compared to Venus with my game, because of our physicality, “ Duval said. “So I always watch her tapes to see what I can improve in my game.”

Answering a question on whether or not she’ll reach Venus’s height, Duval quipped: “I was told my growth plates are still open, so it looks goooood!!! Six feet, C’mon!”

With a large Haitian community in the New York City area I asked her about their support. I’m sure a lot of them were watching,” Duval said. “Maybe all of Haiti but I don’t know.”

Duvall may be out of the women’s singles but she’ll play the Junior tournament. “Downgrading,” she said jokingly. Last year she played three junior slams – the French Open, Wimbledon and the US Open.

She’s planning on playing more professional tournaments, while playing some of the junior Grand Slam events. She’s hoping to get her ranking high enough to play in the professional ranks. “My dream is playing pro tennis,” Duval said.