You are here: Home / Features / Andy Roddick Announces Retirement after US Open 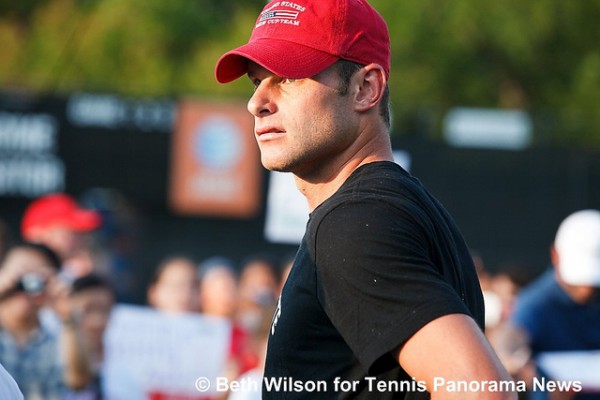 FLUSHING MEADOWS, NY – Andy Roddick held a news conference at the US Open Thursday evening to announce that he is retiring from playing tennis after the US Open.

“I have decided that this is going to be my last tournament,” Roddick said. “I don’t know if I’m healthy enough or committed enough to continue another year. I’ve always wanted to, in a perfect world, finish at this event. I have a lot of family and friends here. I’ve thought all year that I would know when I got to this tournament. When I was playing my first round, I knew.”

When asked about what he will miss most he answered, “All you guys,” referring to the media

During his career Roddick won 32 career ATP World Tour titles. He became No. 1 in the world in November 2003 and ended the year as the youngest American to do so at 21 years and three months.

Roddick was always a Davis Cup stalwart, helping to lead the US to the 2007 title.

Â In his own words: exerpts from Andy Roddick’s news conference

I just feel like it’s time.Â  I don’t know that I’m healthy enough or committed enough to go another year.Â  I’ve always wanted to, in a perfect world, finish at this event.Â  I have a lot of family and friends here.Â  I’ve thought all year that I would know when I got to this tournament.

When I was playing my first round, I knew.

You know, certain parts throughout the year, I’ve thought about it.Â  You know, just with the way my body feels, with the way that I’m able to feel like I’m able to compete now, I don’t know that it’s good enough.

I don’t know that I’ve ever been someone who’s interested in existing on tour.Â  I have a lot of interests and a lot of other things that excite me.Â  I’m looking forward to those.

Q.Â  You’ve been talking about this for a couple years.Â  We’ve talked about 30 is not that old in tennis.Â  Obviously Federer is 30.Â  You’ve been a good athlete, very competitive.Â  In a sense, you’re sort of retiring early, no?

ANDY RODDICK:Â  Well, it’s good.Â  I didn’t want to make it through this press conference without a direct comparison to Roger, so thank you for that.

I don’t know, necessarily.Â  A number is a number.Â  But I think wear and tear and miles is something that’s not really an age thing.Â  You know, if you look at my contemporaries that started with me, Roger is the only one that’s still going and still going strong.

It’s a matter of how I feel.Â  I feel like I’m able to compete at the highest level.Â  Frankly, these guys have gotten really, really, really good.Â  I’m not sure that with compromised health that I can do what I want to do right now.

Well, immediately we announced yesterday or the day before we’re building, with my foundation, a youth tennis and learning center in Austin.Â  I’d like to be hands on with that and not see it periodically.Â  I’d like to be kind of onâ€‘site every day.Â  There’s some other projects, kind of side projects, that I’ve been doing.

Those excite me a lot right now.Â  So I’m looking forward to it.

I’ve always, for whatever my faults have been, felt like I’ve never done anything halfway.Â  Probably the first time in my career that I can sit here and say I’m not sure that I can put everything into it physically and emotionally.Â  I don’t know that I want to disrespect the game by coasting home.Â  I had plans to play a smaller schedule next year.Â  But the more I thought about it, I think you either got to be all in or not.Â  You know, that’s more kind of the way I’ve chosen to do things.

I’ve had some hard conversations with Brooke this year, with Doug and Larry.Â  You know, it was Brooke and I’s little secret over the last couple days.Â  I talked to Larry and Doug today.

We had talked about it throughout the year, obviously.Â  Talked to a bunch of my friends that are here.Â  It’s time.

You know, I’m lucky enough, there are a lot of players where I live.Â  I don’t think I’m one of the guys who won’t pick up a racquet for three years.Â  You know, I still love the innocent parts of the game.Â  I love hitting tennis balls.Â  I love seeing the young guys do well.

I’ll still have a lot of friends to watch.Â  I’ll miss the relationships probably the most.Â  As time passes, I’ll probably miss the tennis more.Â  But immediately that’s probably the thing that is toughest for me.

I think I wanted an opportunity to say goodâ€‘bye to people, as well.Â  I don’t know how tomorrow’s going to go.Â  I hope it goes well and I hope I’m sticking around.Â  I just imagine being off the court tomorrow in an empty locker room.

I think I wanted a chance to say goodâ€‘bye.Â  Also, if I do run into some emotions tomorrow or in four days or however long, I don’t want people to think I’m a little unstable, or more unstable (smiling).Â  That’s why I came to this decision.

There are a lot of different personalities.Â  Some people just want to play until they can’t play anymore, until they’re pushed out just by ranking, or they can’t get into tournaments.

I don’t think it’s fair to maybe generalize this moment for people.Â  Different people tick in different ways.Â  I don’t know that I looked at anybody else’s scenario when thinking about this ’cause I don’t know that I could pretend to relate to whatever they were thinking at a given moment.

I think so.Â  At the end of the day, I know that people view it as a career, last little while, of some hard knocks.Â  But I got to play.Â  I got to play in a crowd, play in Wimbledon finals, be the guy on a Davis Cup team for a while.Â  Those are opportunities not a lot of people get.

As much as I was disappointed and frustrated at times, I’m not sure that I ever felt sorry for myself or begrudged anybody any of their success.

For the moments where it’s been hard, I’ve had 25 positive things that have come from it.Â  Again, anything that people may view as tough, I’ve been very lucky and very fortunate.Â  I’ve gotten a lot of opportunities.

I wouldn’t trade away a day of it.Â  I’ve loved every minute.

There are some other things also.Â  I’m looking forward to it.

I feel clear.Â  If I’m being honest, I would have bet against myself on getting through this without tears today.Â  I must have already gotten them all out earlier.

I feel pretty good today.Â  This has been a huge part of my life always.Â  But I don’t know that it’s always been my entire life.Â  So I do feel very confident in the things and the people that I have to fall back on.

My first time?Â  I was here in ’98, I played Fernando GonzÃ¡lez in the juniors first round.

I came here in I think it was 1990 with my parents as a birthday present.Â  I snuck into the players lounge without a credential.

I saw Pete.Â  He was playing video games.Â  I’m pretty sure I beat him at like Mortal Kombat or something.Â  That was fun.

I was here in ’91 when Jimmy was making his run.Â  We only had grounds passes, but I got into the stadium every day somehow.

Then playing here, I think I played professional in ’99 doubles for the first time.Â  There have been a lot of memories here.

It’s meant a lot.Â  It’s the highest of highs and probably the lowest of lows also.Â  It’s certainly never been boring.Â  I’ve always enjoyed the energy.Â  I feel like each Grand Slam is almost a microcosm of the place it’s played in.

This is a show.Â  It’s New York City in every way.Â  I’m glad that I’ve been a very, very small part of it.

I mean, it’s the most electric atmosphere in our sport.Â  There’s something about it.Â  There’s a lot of eyeballs on TV sets from people who don’t even normally watch tennis during night matches of the US Open.Â  I think I’ve played as many as anyone.

Again, it’s just something I’ll look back on with really fond memories.Â  Hopefully won’t be my last one.

You know, I don’t think I’m foolish enough to think that it’s all going to be easy for me.Â  I don’t know that I would be that presumptuous.

I love my home life, my friends, my wife.Â  My dog is going to be excited.Â  I’m not going to be a deadâ€‘beat dad anymore (smiling).Â  It will be an adjustment, but hopefully if I ever want to come say hi to you all, they’ll give me a credential.