You are here: Home / Features / Federer defeats Phau to Move into Third Round of US Open 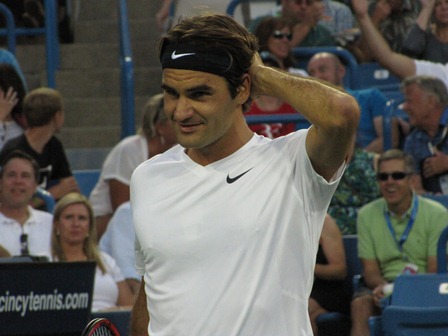 FLUSHING MEADOWS, NY â€“ No. 1 Roger Federer practiced his net game in defeating Germanyâ€™s Bjorn Phau on Thursday night at the US Open 6-2, 6-3, 6-2.

The Swiss won 32 points at the net and 23 points from the baseline over No. 83 Phau in the 90 minute match. In addition, Federer hit 15 aces.

“I don’t think it was a matter of him going more to the net or not,” Phau said. “The way he played today, he was really focused, really playing well, actually.”

“I like coming forward when I am up,” Federer said. “Just try maintaining that. And if things don’t work out that way, you can always play it safe again.”

â€œI see coming forward still works.Â  I like coming forward when I am up in the score.Â  Just try maintaining that.Â  And if things don’t work out that way, you can always play it safe again.

â€œObviously it’s tough for the opponent to try to look for the rhythm as well because I’m trying to break it at that point.Â  It’s enjoyable.Â  It’s a great night of tennis, not too much wind.Â  Great opponent who was also ready to do some shotâ€‘making.Â  It’s a long time, it was obviously going to be fair, tough, and nice.Â  But I enjoyed it, like I always do, particularly the night sessions here in New York.â€

Federer was asked about Andy Roddickâ€™s retirement announcement made on his 30th birthday.

â€œHe was happy to go into retirement,â€ Federer said.Â  â€œHe wants to finish this one strong.Â  There’s no rules on how you announce it, how you do it.Â  We’ve seen so many champions go out in different ways.

â€œHe chose to do it this way.Â  I’m so happy for him really.Â  He’s had an amazing career.Â  Some expected better; some expected worse.Â  But I’m sure he’s happy with what he achieved because he almost achieved everything he ever wanted.â€

Federer continued: â€œI’m thankful for everything he’s done for the game, especially here for tennis in America.Â  It’s not been easy after Agassi and Sampras, Courier, Chang, Connors, McEnroe, you name it.Â  I probably forget a bunch of them because you had so many good players in the past.

â€œIt’s been hard for him as well at times.Â  I thought he always did the best he could.Â  That’s all you can ask from a guy like Andy.â€

Federer will meet Fernando Verdasco to play for a place in the fourth round.