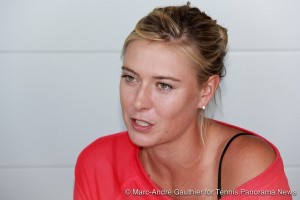 FLUSHING MEADOWS, NY â€“ No. 3 seed Maria Sharapova who isÂ looking to capture her second US Open title, advanced to the fourth round with an easy 6-1, 6-1 win over NCAA runner-up Mallory Burdette.

The match lasted only 58 minutes.

During her post-match news conference she confirmed the rumors that her engagement to former Los Angeles Lakers player Sasha VujacicÂ is no more. They were originally supposed to be married in November in Turkey.

Sharapova said that the engagement had ended in the spring. “I was waiting for someone to actually ask me that question, but nobody did directly,” said Sharapova.

â€œI have never really been the person to announce things,” she said. “I never announced when we were together or never announced that we were engaged. I never have in any of my previous relationships, as well.

“It’s not really the type of person that I am or the way I like to go about things. I’m not an announcer, you know. I don’t go and do interviews about it or photo ops.”

“It was obviously a challenging decision, you know, from both of our ends.Â  Yeah, it was a really nice period of time for both of us, but, you know, our career schedules just made it extremely difficult to see each other with the traveling, and especially his career move to Turkey. Â You know, the playing there was a little bit different in terms of he wasn’t able to travel much.Â  He wasn’t home one time during the ten months that he was in Turkey, so that made it extremely difficult. Â Yeah, but we have a tremendous amount of respect for each other.Â  Still would love to call him as a friend.Â  Yeah, we spent really great years together.

Sharapova will play Russian countrywoman Nadia Petrova in the round of 16.

“I’ve had some tough matches against her” Sharpaova said.Â  “Although I have a good record, they have always been really tough and have gone to some three-setters.”

“She has a big game, great serve, a difficult opponent, but I’m looking forward to that challenge.”