You are here: Home / Features / Djokovic Eases into the Round of 16 at US Open 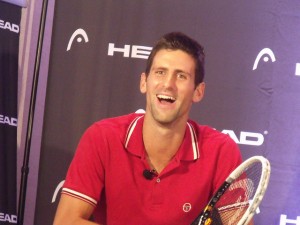 FLUSHING MEADOWS – Defending US Open champion Novak Djokovic may be flying under the radar, but he has been devastatingly dominant in his all of his matches as the US Open. Djokovic led off the Sunday Day session in Ashe Stadium with a 6-3, 6-2, 6-2 win over Frenchman Julien Benneteau to reach the fourth round.

â€œWinning the first set obviously brought me a lot of momentum and confidence to continue on playing well,â€ Djokovic said. â€œYeah, I felt from the start that from the baseline, you know, I was very comfortable, defense, offense, in that position. So I tried to, you know, be aggressive and not allow him to come to the net because, you know, he plays good when he’s in control.â€

The No. 2 seed hit 41 winners and 13 aces past Benneteau in the one hour and 37 minute match. The Serbian did not even face break point on his serve. He won 82% of his first serve points.

What does Djokovic say to flying under the radar in terms of press with the retirements of Kim Clijsters and Andy Roddick grabbing the headlines: â€œWell,â€ said Djokovic, â€œI have had situations and periods in my career where I was under the radar, where I was in the spotlight, you know, if you want to call it that way. I really try not to pay attention on that too much, if you understand. The attention comes and goes. It’s normal. This is sport. Obviously Andy and his retirement attracted a lot of attention, so everybody is excited to see him play and see how far he can go. You know, I have been playing really well in US Open last five years. My goal was to, in these seven, eight days I had off after Cincinnati final, to really try to recover, charge my batteries, work on some things in my game, and come out strong from the start. That’s what I’ve done. I feel great on the court. I’m really trying to keep that up.â€

Djokovic will play the winner of the match between Alexandr Dolgopolov, the No. 14 seed from Ukraine, or Stanislas Wawrinka, the No. 18 from Switzerland for place in the quarterfinals.