You are here: Home / Features / Clijsters Plays Final Match at US Open 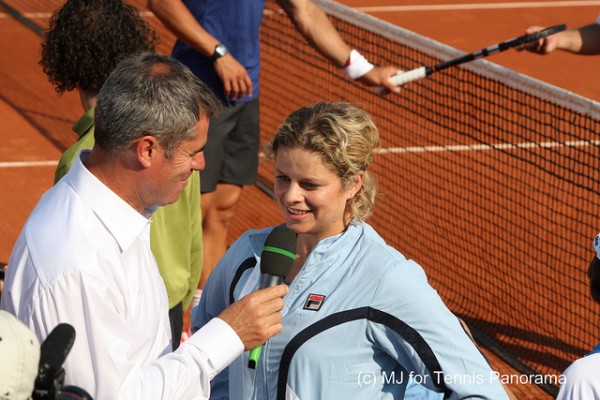 NEW YORK, NY, USA â€“ Upon the completion of her US Open competition in singles, doubles and mixed doubles, Kim Clijstersâ€™ professional tennis career, which has spanned 15 years, has come to an end.Â  With 41 career singles titles, including four Grand Slams and three titles at the season-ending WTA Championships, Clijsters says good-bye to the game secure in her position as one of the all-time greats.

“I have really enjoyed my years on the WTA,â€ said Clijsters. â€œIt has been a great 15 years filled with so many memories. I could not think of a better tournament to finish with. Now I am looking forward to beginning a new chapter in my life and look forward to spending more time with my family. Thank you to all my fans for all their support throughout the years and I wish all my colleagues continued success on and off court.”

Clijsters, who had reached the finals at her last four US Open appearances, says farewell at the tournament that has in many ways come to define her career. Heading into her second round match against Laura Robson the 29-year-old Belgian was on a 22-match winning streak at Flushing Meadows â€“ a run stemming back to her defeat by Justine Henin in the final of 2003. Only Chris Evert has won more consecutive matches at the US Open: 31, between 1975 and 1979.

“Kim is one of the all-time greats and a one-of-a-kind player that is loved by her fellow competitors and fans alike,” said WTA Chairman & CEO Stacey Allaster. “Kim’s fans around the world admire her strength, character and achievements in the sport, all of which will ensure her status as an icon and legend.Â  Among her many achievements in the sport, her incredible comeback after becoming a mother was one of the great inspirational moments in tennis in recent times.Â  I look forward to her ongoing friendship to all of us in the sport.”

Clijsters stepped away from tennis in May 2007, marrying Brian Lynch shortly after and giving birth to a daughter, Jada, in February 2008. But in July 2009, after 26 months away from the tour, she launched what would prove to be a famous comeback. In just her third tournament back, Clijsters won the US Open to become the first mother to win a Grand Slam title since Evonne Goolagong at Wimbledon in 1980. She defended that title in 2010, going on to capture a third WTA Championships title at Doha, and winning the 2011 Australian Open. Her win in Melbourne helped Clijsters return to No.1 one for a 20th career week in February 2011.

With 41 singles titles (41-19 in finals), Clijsters is placed third among active players, behind Serena Williams (44 titles) and Venus Williams (43), and 14th on the Open Era list. She reached at least the semifinals on 16 of her 35 Grand Slam appearances and also shined in doubles, winning 2003 Roland Garros and Wimbledon (both with Ai Sugiyama) among 11 titles and spending 4 weeks at No.1. She is one of just six women to simultaneously hold the top spot in both singles and doubles.

Over the course of her 15-year career, Clijsters delivered against the very best. She finished with a 13-12 record against fellow Belgian Henin; a 9-8 record against Lindsay Davenport; and an 8-7 record against AmÃ©lie Mauresmo. She went 7-6 with Venus Williams, 5-4 over both Martina Hingis and Maria Sharapova, and 3-3 against Jennifer Capriati. Among her fellow former No.1s, only Serena Williams built a winning record against her (2-7).