You are here: Home / Features / Errani and Vinci, Best Friends and Doubles Partners to Face-Off in US Open Quarters 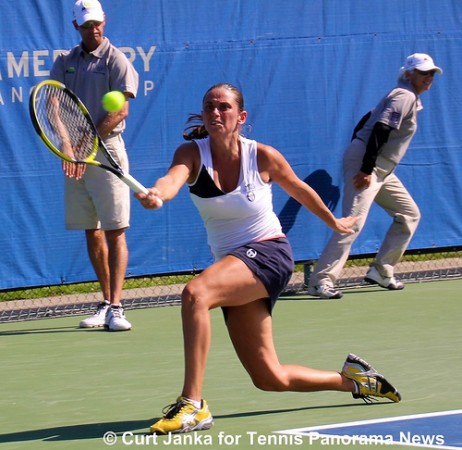 FLUSHING MEADOWS, NY – Best friends and doubles partners, Italians Sara Errani and Roberta Vinci will square off for a place in the US Open semifinals. Both ladies won on Sunday afternoon to advance.

Twenty-nine year-old Roberta Vinci had the upset of the day, stopping No. 2 Agniezska Radwanska.

â€œI’m so happy, so excited,â€œ Vinci said.â€œTough match, for sure.Â  But I think I play really good game today.Â  So focused, so aggressive, especially at the beginning.Â  6â€‘1, 3â€‘1, I lost a bad game on my serve.Â  But on my mind I say, Don’t worry, try to play like the first set, aggressive when was the ball especially in the middle of the court. Â Unbelievable match, for sure.â€

â€œI think I really had the worst day than other days before,â€ said Radwanska.Â  â€œFor sure I didn’t play that well as in the beginning of the tournament.Â  For sure, she was just better today.”

Radwanska said that Vinci plays â€œuncomfortableâ€ tennis. â€œShe really mixes it up, a lot of slice, then suddenly hitting very well from the forehand side, then kick serve, dropshots, volleys as well, coming to the net. Â It’s really tough because she really had an answer for everything today.â€

â€œI have a difficult style of tennis, for sure, different style,â€ Vinci said referencing Radwanskaâ€™s statement of playing â€œuncomfortable tennis.â€Â  â€œI mix a lot of balls.Â  I go to the net.Â  I play a lot of slice.Â  So it’s different. Â So probably she doesn’t like my slice.Â  Also when I go to the net, probably the passing not so good.Â  That’s why I won today probably.Â  This is the key.â€

â€œI think I was trying to give my best,â€ Kerber said, â€œand it was very close and hard match also in the first set.Â  But, yeah, the balls from her were very difficult for me, and also the spin. Â I just tried to be aggressive, but in the important moments she was better.Â  Yeah, I mean, she beat me and it’s okay.Â  I do everything I could do today.â€

So what do these doubles partners think about having to play each other in the quarterfinals?

Vinci is very proud about the rise of Italian players.

“For sure, for sure. When (Francesca) Schiavone won Roland Garros (2010) and Flavia (Pennetta) goes to top 10, also Sara in the final in Roland Garros,” Vinci said.

“Me, I try to come like the other ones for sure.”

In addition to making the singles quarterfinals, they are also in the doubles quarterfianls. They are the second seed.