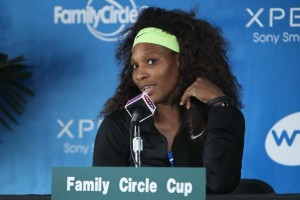 NEW YORK, NY, USA â€“ The Women’s Tennis Association (WTA) announced today that Serena Williams and the doubles teams of Andrea Hlavackova/Lucie Hradecka and Liezel Huber/Lisa Raymond have qualified for this yearâ€™s TEB BNP Paribas WTA Championships, which will be staged at the Sinan Erdem Arena in Istanbul, Turkey. The WTAâ€™s year-end finale, to be held from October 23-28, will feature the worldâ€™s top eight singles players and top four doubles teams, competing for the coveted title and a share of $4.9 million in prize money.

â€œI would like to extend my congratulations to Serena, Andrea, Lucie, Liezel and Lisa on qualifying for the TEB BNP Paribas WTA Championships-Istanbul,â€ said Stacey Allaster, WTA Chairman and CEO. â€œSerena has had an incredible year, becoming the only player in history to achieve a golden career Grand Slam in both singles and doubles, and winning her 5th Wimbledon and 4th US Open titles. Serena’s love of the sport and relentless determination to win continues to inspire generations of tennis fans from around the world.”

â€œAndrea and Lucieâ€™s outstanding play has seen them reach the finals of Wimbledon and the US Open, in addition to winning a silver medal at the Olympics. It is a wonderful moment for them to qualify for their first WTA Championships. Liezel and Lisa continue to set the bar for dedication and commitment, capturing five titles and spending 20 weeks as co-No.1s on top of the WTA doubles rankings. It will be great to see them back in Istanbul to defend their title.â€

This season Williams has added more highlights to her resume, including winning two gold medals at the Olympics to achieve a career golden Grand Slam in singles and doubles, securing her 14th and 15th Grand Slam singles titles at Wimbledon and the US Open, and surpassing sister Venus for the most titles won by an active player (45).

The 30-year-old has compiled a 53-4 record this season and a tour-leading six titles, bolstering her Wimbledon, Olympics and US Open victories with wins at the Family Circle Cup (Charleston), Mutua Madrid Open and Bank of the West Classic (Stanford). She is undefeated against Top 5 opponents this year (10-0), and with her tally of 15 wins, only one player can boast more defeats over World No.1 players (Navratilova, 18; equal with Davenport, 15).

Williams has qualified for the WTA Championships on nine occasions during her career, and is set to compete for the first time since 2009. The American is a two-time champion at the event â€“ receiving a walkover in the 2001 final against Davenport, and defeating sister Venus in 2009 â€“ in addition to reaching the final in 2002 (runner-up to Clijsters) and 2004 (runner-up to Sharapova in three sets).

Click on the link to hear Serenaâ€™s thoughts on her season and qualifying for the TEB BNP Paribas WTA Championships-Istanbul: http://youtu.be/D-xgx4R9gvg

â€œIt is such an unbelievable feeling to have qualified for the WTA Championships,â€ said Hradecka. â€œI watched the matches last year, and Petra Kvitova told us how amazing the tournament was, so we are really looking forward to it.â€

â€œWhen we were planning our goals at the start of the year, our focus was really on the Olympics, but as the results started to come, we began to think it might be possible to qualify for Istanbul,â€ said Hlavackova. â€œItâ€™s great that weâ€™ll be playing indoors on a fast surface, and weâ€™re going to have some fun and make the most of the week.â€

The Czech team of Andrea Hlavackova and Lucie Hradecka has advanced to seven finals so far this season, winning titles at ASB Classic (Auckland), Memphis International, and Western & Southern Open (Cincinnati), in addition to finishing runners-up at Wimbledon, US Open and the Olympics.

First teaming together in 2008 they have collected eight titles, including last yearâ€™s Roland Garros, and in doing so became the first all-Czech pairing to win a Grand Slam doubles title since Jana Novotna and Helena Sukova won Wimbledon in 1990. Both players will be making their WTA Championships debut, and will follow in the footsteps of Novotna/Sukova who were the last Czech team to contest the WTA Championships, also in 1990.

â€œOne of our goals this year was to return to Istanbul and defend our title at the TEB BNP Paribas WTA Championships,â€ said Huber. â€œIstanbul was a memorable experience last year and I am excited to be heading there again in October. The doubles competition there will be tough and I’m sure the fans will see some of the best tennis all year.â€

â€œIâ€™m thrilled to qualify for my twelfth WTA Championships and am looking forward to ending the year hopefully on a high note in Turkey!â€ said Raymond.

Between them, Huber and Raymond own 132 doubles titles, including 11 Grand Slams and 7 Championships, including last year in Istanbul. Huber has spent 199 weeks at the top of the WTAâ€™s doubles rankings â€“ behind only Navratilovaâ€™s 237 weeks â€“ while at 39 years of age, Raymond is the oldest player ever to hold the WTA No.1 ranking in singles or doubles.

Huber will be making her sixth appearance at the year-end finale. The 36-year-old is a three-time winner of the WTA Championships, having won in 2007-08 with Cara Black, and last year with Raymond. This will be 39-year-old Raymondâ€™s 12th journey to the event, having first qualified in 1994. Including last yearâ€™s victory, she has won the title four times; also in 2001 with Rennae Stubbs, and 2005-06 with Samantha Stosur.