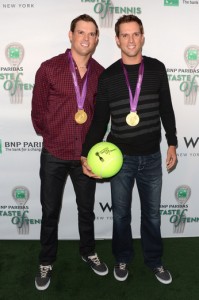 WHITE PLAINS, N.Y., September 7, 2012 — The USTA today announced that Samantha Stosur, Bob and Mike Bryan have received the first-ever â€œUS Open Sportsmanship Awardâ€ presented to the male and female professional tennis players who best demonstrate excellence in sportsmanship throughout the Emirates Airline US Open Series and the US Open.Â  The awards were presented to the winners at the US Open by USTA Chairman of the Board and President Jon Vegosen and Sportsmanship Selection Committee Chairman Todd Martin.

â€œGreat sports make a sport great and Samantha Stosur is a perfect choice for the US Open Sportsmanship Award,â€ said Vegosen.Â  â€œSamantha is a phenomenal player and also exhibits the type of quality and tradition in our sport that we want to showcase. When someone like Samantha has accomplished as much as she has and is still a class act, it shows that character is really important in the game and in life.â€

“I feel extremely honored to accept the Sportsmanship Award,â€ said Stosur. â€œI always try to compete hard and growing up watching my idols, I admired the players who were graceful in victory or defeat. It was a surprise to receive the award and nice to take home the beautiful trophy, although not quite the big one I was after.”

â€œBob and Mike are both great champions and gracious competitors, making them the perfect choice to receive the US Open Sportsmanship Award,â€ said Vegosen. â€œThrough all of their accomplishments on the court, Bob and Mike have exuded the class and integrity that exemplify what makes tennis such a great sport. Their success continues to set a perfect example for future generations.â€

Bob and Mike Bryan won the 2012 US Open menâ€™s doubles title to break the Open Era record for the most Grand Slam team titles with their 12th major trophy. The Bryans passed Todd Woodbridge and Mark Woodforde in the Open Era and tied John Newcombe and Tony Roche for the all-time record. The Bryans also won the Emirates Airline US Open Series event in Toronto this summer and reached the semifinals of the Series event in Cincinnati.Â  Off the court, Esurance, the official car insurance sponsor of the US Open, teamed up with the Bryan brothers and USTA Serves this summer to support two tennis programs benefiting at-risk youth.

Eligibility requirements for winners include participating in at least two Series tournaments, as well as the 2012 US Open.Â  In addition to a handsome trophy, each US Open Sportsmanship Award winner receives a $5,000 donation to the charity of his or her choice.