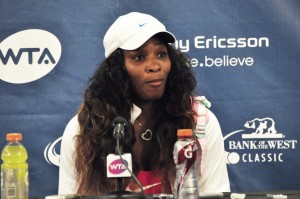 Williams is looking forward to her second appearance at the Brisbane International. â€œI love the tournament, itâ€™s great,â€ said Williams, whose US Open triumph this week capped off a golden tennis year that included Olympic gold in both singles and doubles as well as the Wimbledon title.

â€œ[The Brisbane International] it helps me prepare. I get a great tournament … tough field,â€ said Williams.

â€œI had so much fun this year but unfortunately it ended fast for me with a disaster of an injury, I want to do well there [in Brisbane] … the city was great, I did a lot of shopping and I stayed in a great hotel,â€ the current world No. 4 continued.

The 30-year-old American reached the quarterfinals of the 2012 event but withdrew prior to the match with a left ankle sprain.

Throughout her career Williams has captured an impressive 45 WTA singles titles and on 4 August 2012 she became only the second woman after Steffi GrafÂ to complete a career Golden Grand Slam, winning all four Grand Slams plus an Olympic gold medal.

World No.2 Sharapova is set to make her first appearance at the Brisbane International in January and like Williams,Â is excited to be starting her year in Brisbane.

â€œI am so looking forward to coming to Brisbane for the Brisbane International. It will be my first time attending so I canâ€™t wait to see all my fans there,â€ Sharapova said.

â€œGoing into Australia after a long off season you always want to have the best possible matches. I tried to put Brisbane on the map last year but unfortunately couldnâ€™t make it out of injury … I have heard so many great things about it. It is such a big event for all the players,â€ Sharapova added.

Coached by father Yuri Sharapov and Thomas Hogstedt, Sharapova has enjoyed a stellar 2012, reaching the final of the Australian Open, being crowned the French Open champion, winning an Olympic silver medal and having the honour of bearing the flag for the Russian Olympic team.

â€œThese global superstars are an exciting addition to our player field, which of course already includes Andy Murray – the newly crowned US Open menâ€™s singles champion, and we look forward welcoming them to Queensland and providing fans with some great tennis action.

â€œHaving Serena and Maria, the worldâ€™s top female players, choosing to start their year in Queensland, is testament to the quality of the Brisbane International and the competition on offer,â€ Pearson added.

â€œQueensland tennis fans will be thrilled to welcome Serena Williams and Maria Sharapova to Brisbane for the 2013 tournament,â€ said Ms Stuckey.

â€œEvents like this are a major contributor to the stateâ€™s economy, playing an important role in the Newman Governmentâ€™s goal to establish Queensland as Australiaâ€™s number one tourist destination.â€

In 2012 the ATP recognised the Brisbane International for the best fan experience of any tournament in the ATP International Group, which includes the Middle East, Asia and Pacific regions.

Brisbane International 2013 presented by Suncorp is made possible by the support of Events Queensland and will take place at the Queensland Tennis Centre, Brisbane, from 30 December 2012 to 6 January 2013.