You are here: Home / Features / Spain Takes a Commanding 2-0 Lead Over US in Davis Cup Semifinals 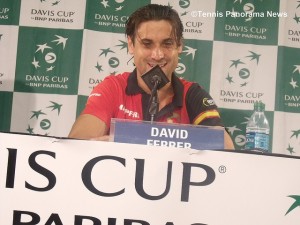 Spain is a win away from advancing to the Davis Cup final for the fourth time in five years. In Gijon, Spain’sÂ  David Ferrer and Nicolas Almagro gave Spain at 2-0 lead on day 1 versus the United States in the Davis Cup World Group semifinals on Friday.

â€œItâ€™s never easy to adapt from hard court to clay, and with only three to four days even less,â€ said Ferrer. â€œI didnâ€™t feel too bad, but I didnâ€™t play perfect tennis, either.â€

Querrey failed to convert on 12 break point chances. â€œOn a couple of them, I should have been more aggressive but he played good points,â€ said Querrey. â€œI feel if I get one of those breaks, it could be a different game.â€

“It was a very tough match throughout, he didn’t make it easy for me,” Ferrer said to Spanish television.

Only once has the US ever rallied from an 0-2 deficit, back in 1934 against Australia. Spain is a perfect 37-0 after winning both opening singles matches, since World Group play began.

“Proud of both these guys. They both went out there and laid it on the line and fought hard. They were two great battles, and all of us on the team are very proud of what these guys did today.”

The winner of the tie will face either Argentina or the Czech Republic in the Davis Cup final in November.