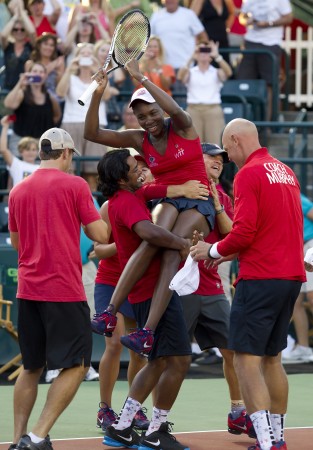 The win gives the Kastles 32 consecutive match wins, the second longest streak in U.S. pro sports history. The top mark is 33, held by the NBA’s 1971-72 Lakers.

With the overall score tied at 15-15 heading into the final set, Williams edged Coco Vandeweghe 5-4 in women’s singles to give the Kastles their third title in the past four seasons. Although Williams was part of championship teams in Philadelphia and Washington, this was the first time she had played in the championship match. She credited her Kastles teammates for giving her the edge in a tight final set. “I had to come out on fire today,” said Williams. “Knowing I had to play for my team was motivating.”

“Coco played her heart out,” said Sacramento coach Wayne Bryan. ” I’m very proud of our team and congratulations to the Kastles.”

Coach Wayne Bryan started Anderson in mixed doubles to take advantage of his big serve and the strategy worked as Sacramento won the first game and broke Paes serve to lead 2-0. Washington broke back against Vandeweghe’s serve then Williams held to tie the set at 2-2. After a seesaw battle that evened the score at 4-all, Washington pulled out the set win in a 9-point tiebreak, 5-4 (1).