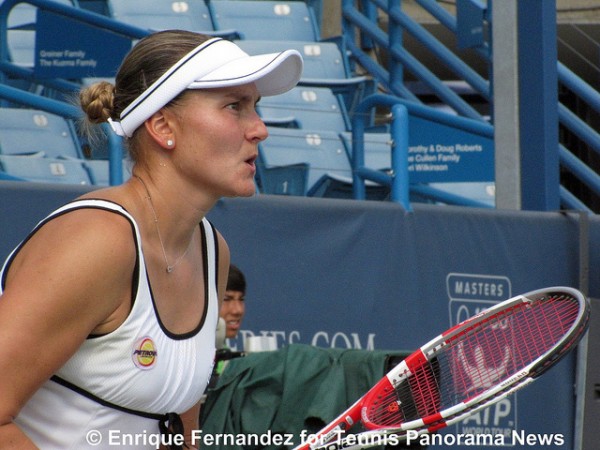 Nadia Petrova captured her 12th career WTA title on Saturday by winning the final of the Toray Pan Pacific Open over defending champion No. 3 Agniezska Radwanska in Tokyo.

“After running out of gas in the second set, I don’t know where I found the strength and willpower to fight in the third set, but I did and it feels amazing,” Petrova said. This is the biggest tournament I’ve ever won. It’s a great accomplishment. And at the beginning of the tournament I definitely didn’t expect to win the title, because of the back injury I’ve been struggling with. I’m so happy to be here right now.

“There are a few players who have won Grand Slams after 30, and I feel like I don’t want to walk away from tennis without accomplishing the same. I still find the will to wake up every morning and go on the court and try to improve with each day. If it’s meant to happen it will, but if it doesn’t, at the end of my career I’ll know I’ve done everything I could.”
Petrova knocked out three top ten players during the week -Radwanska, No. 7 Sara Errani and No. 9 Sam Stosur.

“I’m disappointed, ” Radwanska said. “I wanted to win this title so much, and when you’re so close and feel you can make it, it’s always emotional if you don’t. But she was playing really well. Her biggest weapon is her serve, for sure, but also her return was very good today, and I had to serve really well myself to hold my serve. But overall I think those two shots were working really well for her today.”

Petrova, currently ranked at 18 in the world, is expected to move up to No. 14 when the rankings come out on Monday.