You are here: Home / Features / Notes From Behind the Wall at the China Open

Notes From Behind the Wall:

Count on the Chinese to ask the blunt questions, no sugar-coating. Exhibit A:

AGNIESZKA RADWANSKA: Well, actually, we’re still okay, we are still friends, so I don’t know really what is the question about.

What the transcript does not show was Radwanska saying she does not understand the question before having it repeated and giving the answer above. The question was definitely a surprise since the two haven’t met since Madrid after facing off one tournament after another since the start of the year. By Indian Wells, already their fourth encounter, the friendship seems to have soured after Radwanska called out Azarenka for exaggerating an injury sustained during their match in Doha. In the tennis calendar, Doha in February seems like a lifetime ago. But don’t blame the Chinese media for bringing that up now, after all, they’ve been waiting the whole year for the tour to finally make its way here. 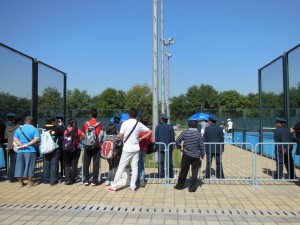 The drawing power of the Armada?

The practice courts on Monday morning were a relatively calm place for a scattered group of spectators to check out the players as they do their thing. On court 1 was Christina Mchale still here and practicing hard, on court 5 there was Laura Robson against Virginie Razzano. Then you see several security people lined up behind the fence that straddles practice courts 1 and 2. 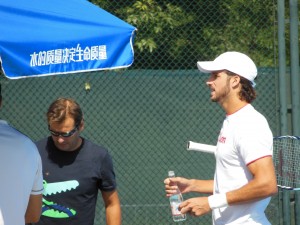 It turns out that scheduled for noon at court 1 were Fernando Verdasco and David Marrero and on court 2 were Feliciano Lopez and Pablo Andujar. In the end, there weren’t many people around the practice courts anyway for security to control. 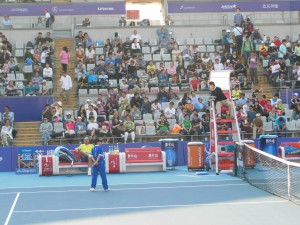 The legend of the Fabio

Having heard so much about the on court antics of one Fabio Fognini, I had to go check it out for myself. I left the media room when Fognini was down a break at 1-3 and I get to the court and he had just lost the first set 1-6. Then it was all Fabio talking to the umpire complaining about the line calls. Fognini to Steve Ulrich “You make me crazy. I’m not joking, you make me crazy.” I feel for his coach who was very enthusiastic, yelling encouragement even in French and Spanish “Tres bien” Vamos!” This was all to no avail as the complaining Fognini loses to Florian Mayer 1-6 2-6.