You are here: Home / Features / Notes and Quotes From Monday at the China Open

BEIJING, China – A few of the more “notable” quotes from some of Monday’s news conferences at the China Open. 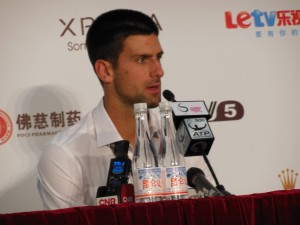 On getting back to the top spot:

It is still open, you know, the No. 1 spot of the world.  Obviously I will try to dedicate myself and focus to every tournament that I play, try not to think about what’s going to happen in the end of the season because there is still, you know, more than a few tournaments to go, you know, here in Asia and then after, indoor season in Europe.

Asked about his understanding of fashion as he wears a tie to his pre-tournament news conference:

So, I mean, every tennis player, every athlete, every person has a different way of perceiving fashion.  I cannot speak or generalize things and opinions.  I like fashion.  I follow fashion.  It’s important part of people’s lives, but I don’t depend from it, also.

My opponent is the one I focus on tomorrow.  That’s all I think of at this moment, is the first match.

As I said, I haven’t played here in two years.  I never played on the big stadium, new stadium, because it was used for the first time in 2011.  So I’ll try only to focus on tomorrow’s match.

And regarding the other players taking a part in this tournament, it’s a great field.  You know, you have top 10 players.  You have really good quality players, attractive players for the fans, and, you know, obviously it’s a combined event.

So in the woman’s side it’s maybe even stronger.  It’s good for everybody to have such a strong tournament.

At this moment Federer, Nadal, Murray, myself, we have been playing really, really well in last five, six years and grabbing most of the Grand Slam titles, so I think that gets more attention to our sport, you know, the rivalry that we have between each other.

But we’ll see.  You know, it also depends how far Roger is gonna go, how long he’s gonna play more.  You know, Rafa having not played from Wimbledon, see how he’s gonna feel physically.

Murray I think is playing better than ever.  You know, he won his first Grand Slam title.  I’m sure that he’s one that’s going to be in the future one of the contenders to win every Grand Slam he plays in.  He definitely has the skill, the quality.

But there is many more other players like Tsonga, Berdych, Ferrer who can surprise, who can, you know, be out there fighting for a trophy.

Asked about dancing Gangnam style at China Open and dancing with Andrea Petkovic?

Andrea?  Well, sure, why not?  I’m open for any suggestions.

That song is actually very popular.  I did dance a couple of days ago with that song.  So why not?  If she’s ready, I’m glad to dance with somebody.  You know, I don’t like dancing alone.  It would be nice if it’s a girl, also.

Radwanska:  Well, actually, we’re still okay, we are still friends, so I don’t know really what is the question about.

Q.  Last year you and Andrea Petkovic played a good game in the final.  After the match, you danced with her on the court.  So this year, if you are able, if you will defend your title, will you dance again on the court?

Radwanska:  I promise if I win that tournament I can even dance more.  You remind me if I will be in the final.  (Smiling.)

Asked about her health since she pulled out of Tokyo last week with dizziness:

Yeah, I feel much better, which is, you know, everything I could ask for is to feel better physically.

So still, you know, maybe not perfect as usual, but I can’t complain.

Goal for the last part of the season:

The goal is to finish the year, you know, as strong as possible, the same way that I started; you know, to be consistent, to have, you know, good results and still in that last period of time that we have during this year to improve myself as a player and step it up, you know.

We have a few more weeks that, you know, just try to keep the focus, keep the motivation up, and hopefully, you know, physically will allow me to show my best tennis.  I’m really excited to finish the year on a strong note.

On his surprise loss to Romanian wild card Marius Copil ranked No. 221 in the world:

Well, I would say just I wasn’t serving consistently well, especially, I mean, when I had the break up in all three sets I would lose my serve, especially there in the third set.

I lost it.  I mean, on the beginning of the third set, the first break that I lost I almost won all those three points that I lost before the break of the serve, and then I missed, either made a double fault or made a wrong call for the Hawkeye and missed one easy ball, and then at the end of the set I just lost couple points which I almost won.

So it was a little bit difficult to judge for me that, I mean, couple points decided.  I think he served really well, especially from the second set to when he broke me back and in the third set.

I tried to move a little bit more around just to give him a different perspective to look at.  It was working well, especially on the second serve.  I was winning a lot of points on the return with that, I think, but mostly the problem came in my service games where I didn’t execute in the right way  I wanted.

That just gave him a little bit of an edge, and he was more relaxed on his service games.

I’m very disappointed, as I always feel here may be the best in the year, and the conditions here would suit my game almost perfectly.  Really sad that I lost, but looking ahead, I have to be positive for next three tournaments to try to play well, and hopefully I’m going to get my chance next year.