You are here: Home / Contributors / Notes from Behind the Wall at the China Open – October 2, 2012 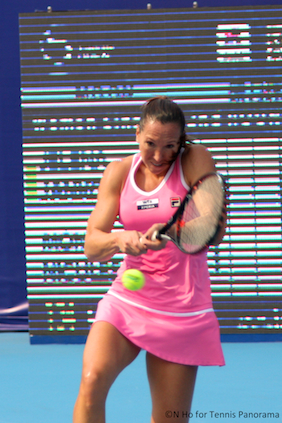 BEIJING, China – Jelena Jankovic’s smile will remain on her face as she easily defeated Monica Niculescu and her unusual game 6-2 6-1 in her second round match at the China Open on Tuesday in Beijing. Jankovic has plenty of fans in Beijing and they weren’t shy about showing their support and giving her encouragement. We haven’t been seeing much of Jankovic’s famous personality and smile as her form has dipped and her ranking has plummeted, so it was a welcome sight to see her smile even before the first point of the match was played. Walking to the baseline to start the match to serve, Jankovic’s effusive Chinese fans were already cheering her on which elicited a smile that hasn’t been there for quite some time now.

Jankovic’s beautiful down the line shots are still there, but the consistency off them which saw her reach the no. 1 ranking is the one that’s gone missing. And with every missed shot was an on-the-ready expression of frustration. In the end, the consistency and the smile finally wins out over the missed shots and the glares to her coach team. 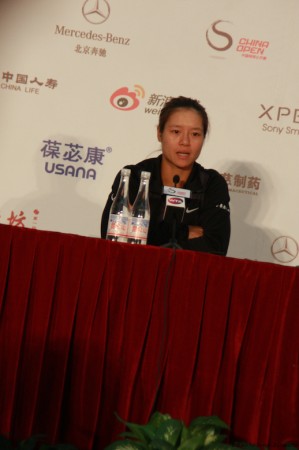 I’ve never seen a player applauded for winning a round, but that’s what Li Na received as she came in to her post-match news conference following her 6-1 6-2 win over Nadia Petrova in her 2nd round match at the China Open. Maybe it has to do with her finally breaking her 6-match losing streak against Petrova.

For Li Na, that’s the charm in playing tennis. “Every day you can challenge yourself. You are defeated consecutively, but it doesn’t mean you were defeated by her all the time. This is sport. You never know what’s gonna happen.”

Even more rare is a player applauding a reporter. And that’s what Li Na did after being asked this question:

Q. Another question is we noticed when you are in rush a little bit or when you are a little bit impatient you like to say something to your coach, and Carlos has said that you have to calm down. He give you a gesture to make you calm down. In that case, you have a very important role in balancing the relations between you and Carlos?

Li Na claps and then replies “You are absolutely correct. I think before Carlos jump in, I didn’t have any intent to share with my team. But I’m not sure ‑‑ how did you spot the detail that when I start to be impatient Carlos told me to calm down?

I have to share this information to Carlos. I think he will definitely share the same thing with me.”

Tale of a set:

A set that was all on Su-Wei Hsieh‘s racquet, from starting with a double fault and getting broken in the first service game, to ending with a down the line backhand winner to take the first set in her second round match against Caroline Wozniacki 7-6 (7-5).

Hsieh came back to win the set from being down a break twice and down two minibreaks in the tiebreak as well. Wozniacki couldn’t take advantage of all the leads given to her. Serving at 5-4 in the tiebreak with a mini break, her second serve was too short which gave Hsieh an opportunity to go for a return winner which she did. Two more winners later and it was first set to Hsieh.

A female Fabrice Santoro? Wozniacki was constantly kept guessing at what shot Hsieh would go for next. Put away a short ball deep with a drive down the line shot? Or a cleverly disguised forehand dropper? How about a sliced forehand approach shot? Either Hsieh was making errors or hitting winners and Wozniacki was left reacting and defending. In the end, the winners started clicking again, and Hsieh came away with a set.