You are here: Home / Features / Veteran Lopez Takes Down Harrison in Beijing 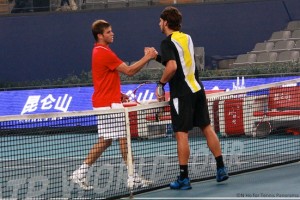 BEIJING, China – Twenty year-old American Ryan Harrison ranked No. 54 in the world played against 31-year-old Spaniard Feliciano Lopez ranked 30th on Tuesday at the China Open in Beijing. This is the kind of match a young and upcoming player like Harrison should be able to consistently win to steadily climb the rankings, and prove he has the potential to reach the top.

Harrison, known for his fiery, even petulant behavior on court was calm and composed throughout the match. Even after conceding the first set in a tight tiebreak, losing two minibreaks with errors, there was no hint of frustration boiling over. His patience and steadiness paid off in the second set when he broke Lopez in the eleventh game game and served out the set for 7-5.

But in the end, Harrison’s game unraveled, though his calm demeanor stayed the same. Will we see the old, fiery Harrison back in his next match?  Still it was Lopez who had more power and more guile. Harrison’s attitude may have improved, but it’s the game that showed that needs more work.