You are here: Home / Contributors / Notes from Behind the Wall at the China Open – October 3, 2012 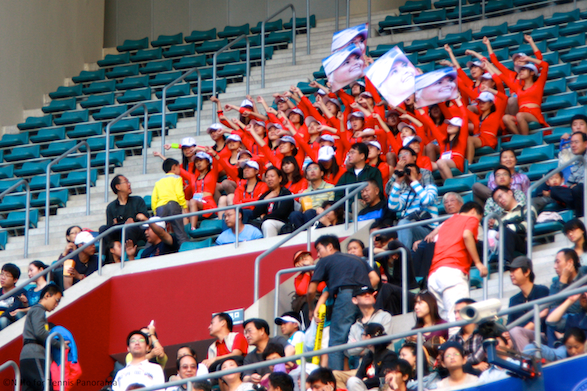 What Chinese fans lack for in numbers at this tournament (ironic for a country with 1 billion in population), they make up for in their enthusiasm. 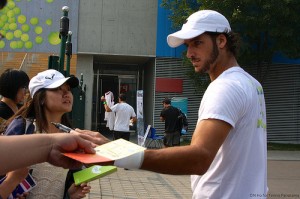 Feliciano Lopez tweeted how “the fans here are crazy.” These crazy fans are always ready with their flags, posters and cheers. They all have their favorites and they go all out cheering for them. Lopez had his fangirls competing hard cheering against the fans of Ryan Harrison. Julia Goerges had this little boy, maybe around 10 years-old, with a German flag shouting “C’mon, Julia!” and “Auf ghets!” on every single point. The Maria Sharapova – Sorana Cirstea match was made more fun by the dueling cheers between one group of Sharapova fans in green with a Russian flag and another group in Red with Sharapova’s blown-up pictures. These fans provide the shining light in sometimes near-empty stadiums.

Speaking of near-empty stadiums, the China National Tennis Center is huge. Its second show court, the Lotus court was already the main court during the Olympics. In all, there are 3 big show courts, a mid-sized 4th court and 8 more smaller courts. This site is just too large to be filled up by 64-draw WTA Premier Mandatory event combined with a 32-draw ATP 500 event.

The two smaller show courts, the Moon Court and Court 1 have great atmosphere though. The Richard Gasquet-Matthew Ebden night match on Court 1 was nearly full. Same for the Bryan Brothers doubles match against Feliciano Lopez and Pablo Andujar on Moon Court. But the matches here are so spread out among these many courts that the two big show courts, the courts shown on television end up often empty and lacking atmosphere.