You are here: Home / Contributors / Sharapova Powers Past Cirstea in China Open 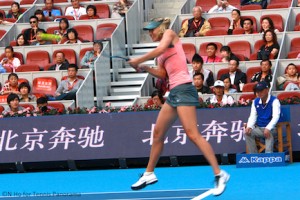 BEIJING, China – Power for power, Sorana Cirstea can match Maria Sharapova off the ground. But Sharapova has consistency in her game which Cirstea still has yet to find.

Sharapova, whose game has been off since the semis of the US Open has finally found her shots and the lines. The calmness is back too. Every time Sharapova founds herself down in her service games after Cirstea connected on a few winners, she managed to pull out good serves to turn the score around, get back what little momentum Cirstea has gotten and keep holding. 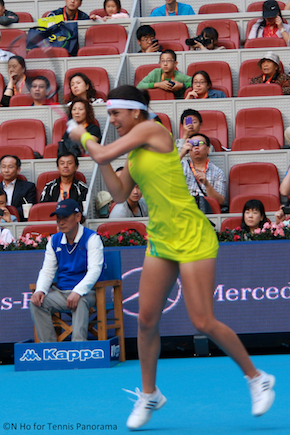 “She hits the ball really flat and hard,” Sharapova said.  “I tried to, you know, play aggressive and play my game and maybe try and figure out her rhythm a little bit from the beginning, especially not playing with her before.”

“I was happy I played a shorter match than the first round,” Sharapova said as she was happier with her game today.

“I think she’s someone that really likes to be aggressive and get the first shot, and, you know, hit it really hard, as she can.  I think it was really important to try to take that away from her.

“You know, I thought I served really well today, much better than the first round.  Yeah, I got some free points off of that.”

In the next round Sharapova will face off against Polona Hercog of Slovenia.

“I have never played against her, Sharapova said.  “I think she has a big game but also a different game, you know, hits a lot of slice off the backhand, you know, has a big forehand.

“So, you know, it’s also like coming into today’s match, try to figure your opponent out from the beginning and maybe concentrate what you have to do and not so much about her, because you can get a little bit carried away thinking you’ve never faced her before, what it’s going to be like.

“I think it’s just a matter of keeping that goal ahead of you and not thinking about it too much.”

Karen Pestaina contributed to this report.