You are here: Home / Contributors / Kerber Qualifies for WTA Champions with Win Over Wozniacki at China Open 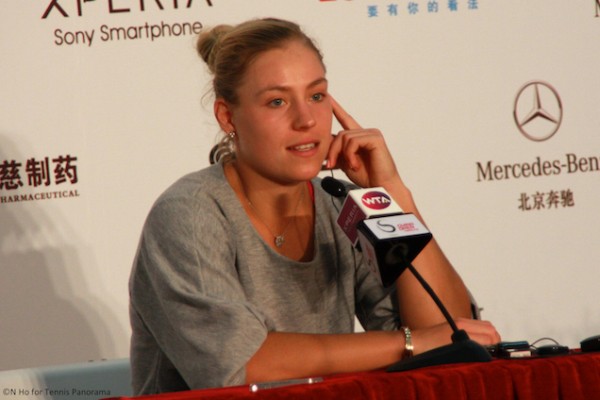 BEIJING, China – As Angelique Kerber officially qualified on Thursday for the first time in her career for the TEB BNP Paribas WTA Championships-Istanbul, she notches her 59th win of the season to reach the quarterfinals of the China Open with a 6-1, 2-6, 6-4 over Caroline Wozniacki. Even as Wozniacki steadied her game after a lopsided first set (she had 3 winners and 10 unforced errors in the first set compared to 8 winners and 3 unforced errors in the second set), it just didn’t seem it would be enough to defeat a more confident Kerber who attacked more and defended better. Kerber’s defense off her backhand side was especially impressive. She never seemed to get off-balance from that side and defends with pace and precision, managing several times turn around rallies to win them. As Wozniacki tried to up her attack, she found herself facing someone like the player she was when she was on the top of her game.

The match was a study in psychology. There’s Wozniacki, trying to re-find her game, more negative in her body language. From the start of the match, there’s an annoyed look in Wozniacki’s face that exudes a negative energy. Even as she wins points and games and connects with winners, she seemed expectant and ready to face defeat. When she tries to be aggressive and loses the point, she shrugs her hands towards her dad. It wasn’t until she got a second break in the second set did a “C’mon!” come out from her. And it wasn’t until she found herself locked in a battle in the third set did the old fight and cussedness come out. Contrast against a confident Kerber who fistpumps to her box after connecting on a beautiful winner, or gets angry with herself when she commits an error. The two players’ attitudes for most of the match were as much a contrast as their results are this year.

This was the type of match Caroline Wozniacki used to win when she was the no. 1 player in the world. A 3-set battle where she eventually wears down and frustrates her opponent with her dogged defense and comes out the winner. But on a crisis of confidence, confused with her game, against someone whose career is going the opposite direction, it’s Wozniacki who caves, goes for the riskier backhand down the line shot down match point and pushes it wide. She loses 1-6, 6-2, 4-6.

“This has been the best year of my career,” said Kerber, the first German to play the year end event since2001. “To have the opportunity to play at the WTA Championships will be an amazing way to end 2012.”