You are here: Home / Features / Notes and Quotes From Thursday at the China Open

BEIJING, China – A few of the quotes from some of Thursday’s news conferences at the China Open.

Wild card Ze Zhang became the first Chinese player on the ATP World Tour to defeat a top 20 player with his win over Richard Gasquet on Thursday 6-4, 3-6, 6-4 at the China Open.

Q: Today you played three sets and eventually win, but prior to that you said you can try to fight against a high competent player like this one but the match is really short. But today you win the game. What do you think might be the reason for you to play against such a high, competent, high-profile opponent?

ZE ZHANG: This year actually I play a lot of, you know, high-profile tournament. This give me a lot of opportunity to play against the high-profile opponent.

So once you play frequently with them, you will be gradually familiar with them. Today I have no fear. I’m very much relaxed. I”m not that nervous, so I”m going to try my best to play with utmost performance.

Q: Congratulations for your victory. We know that actually your performance has a big contrast in the past two years. You have a big breakthrough today. Also, your performance have sort of a leap forward. You are coming to a new starting point. Standing at a point like this one, I think your pressure is not only trying to have one step further, but most importantly, how are you going to try to keep this ranking?

ZE ZHANG: You are right that this is a new start. I don’t think this is pressure. Just opposite. I think this is very important, very important driving force for me, because the most matches you are supposed to win, the more points you are going to get and more high ranking you will get. You don’t have to highly concentrate on those things.

Q: Can you tell my why you appointed the coach that you have and if you felt you needed to look outside China? Did you feel you needed a foreign coach?

ZE ZHANG: I think because the foreign coach can provide me with something more enlightening, just like my coach right now who has already coached a lot of high-profile players before.

So what he’s supposed to bring me will be very much different from the one I can get domestically. 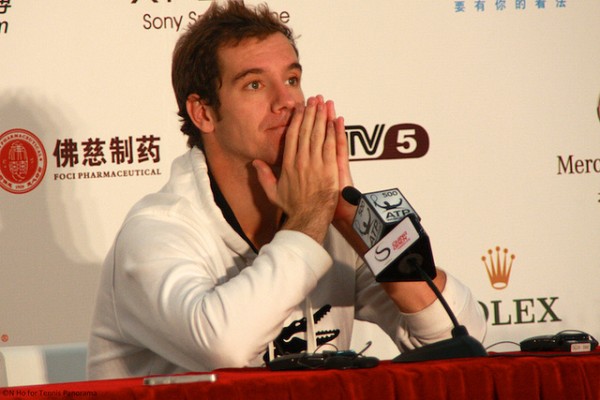 Q: What kind of preparation did you have for this match? Did you ever think that the opponent has a strong or threatening service to you or probably Ze Zhang’s backhand has already constituted a huge backhand?

RICHARD GASQUET: Yeah, he served well. He played well. The court was very fast, you know, for me. I think the key of the match was my backhand was very bad today.

When I play against a guy, backhand against backhand, I’m good. Today it was not working for me.

Anyway, I should win at 2-0 in the third set. I had the chances to win this match, to win the match, and I played bad mistakes. And him, he plays good. With the crowd and the court, he plays good.

He deserve this victory. It’s good. 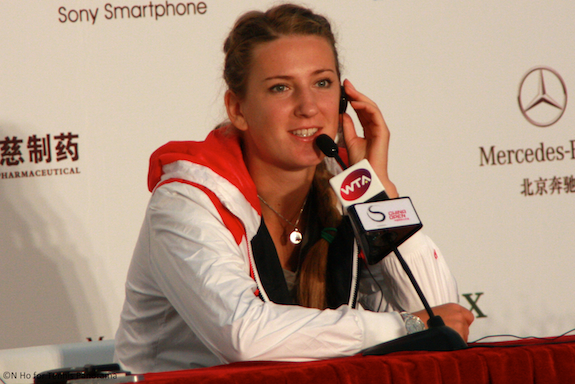 VICTORIA AZARENKA: I don’t feel like I was getting really frustrated during the match. I wasn’t happy with some things, but these kind of emotions just hold you in the game, you know, to try to push yourself forward, not to really get down.

For me, sometimes, it helps to be more alert, to be more aggressive after. So I was just going my way. But I felt like it was a really long game, you know, a lot of tension in that last game.

I really wanted to win it because I had a few match points and really couldn’t convert them. So when I won that last point, I was relieved, and you know, happy to finish the match in two sets.

Q. Can you talk about the fun side of combined events? Do you actually watch some men’s matches, or do you have lunch together in players’ restaurant, or do you socialize a little bit in the players’ lounge?

MARIA SHARAPOVA: Yeah, I’m not the social type in the players’ lounge. It hasn’t really been my repertoire. I do my job and I come here, and I honestly sometimes don’t know who’s playing and who’s not.

You know, the tournament for me is when I come here and I have an opponent that I have to face and I get ready for and I play that match. I mean, once this press conference is over and I’ll eat something, I’ll be back in my hotel and not knowing what’s going on later today. You know, I’ll probably maybe see the result of who my next opponent is.

But as far as focusing what’s going on around and who’s talking with who, I don’t know, it’s just none of my business.

Q. Just like this one, you had three very easy wins to push you into Round 4 of this year’s tournament. What’s the key to your well-rounded performance?

MARIA SHARAPOVA: Very good English. I think that’s the best English spoken by a Chinese on my trip here.

Yeah, you can say it’s been two sets and it’s been easy, but in any particular situation and any match you go into — you know, look at the match today. I was up a set and I was up a break and played a couple loose points, and then all of a sudden your opponent, you know, starts feeling better, gets a little bit of confidence and makes the match difficult.

So there’s no such thing as a really easy match. You know, there can be so many swings from the hour, three hours that you can be on the court, so it’s really about maintaining that focus and concentration from the start to the end.

Even if you have a few moments where you feel like you have a little bit of a letdown, I try to recover from it as fast as I can.

Q. In the past few days you have answered a few questions about Sugarpova. My question is: Among all the business opportunities you had, why you choose candy to start your own business?

MARIA SHARAPOVA: Because I eat way too much of it, and, well, I love food and I love candy. And the reason it was gummies is because when I came from Russia to the United States and I first tried a Gummy Bear worm, nobody has ever seen that in Russia. It really fascinated me and I loved it.

I mean, when the name came out, I thought it was just so fun and young. Then I put two together. Then I did a lot of research on brancs that make this type of candy.

When I would ask my friends, like, what’s their favorite gummy, they would tell me a particular shape that they liked. They would never tell me a brand.

Then it just clicked in my head that that is something I want to change, you know, that in the future when people ask what their favorite gummies are, they say Sugarpova. They don’t say it’s worms or something like that.

That kind of clicked. It’s kind of where it all started. 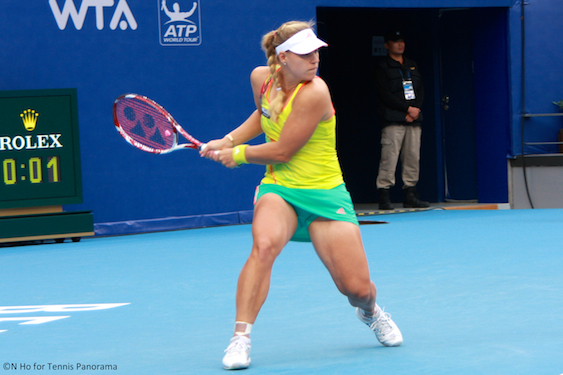 Q: In the first set it’s very much easy to win, but in the second set you lose it. Did you even try to think what had happened? The next question is: What’s your preparation and expectation for the next match against Sharapova?

In the second set I think she played better and make not so many mistakes. So, yeah, she deserved to win the second.

In the third I just tried to focus on me, to focus on my game plan and try to be aggressive, move good. Yeah, I’m very happy that I won the very tough match against Caroline.

My next opponent is Maria, so I think I have nothing to lose yet. I will go out there tomorrow and enjoy the match and of course give my best. We will see what’s happen then.

Q: I think you have risen from 32nd place in the rankings in the end of last year to I think 6 at the moment. What are the reasons for that? Why this year you have made a breakthrough?

ANGELIQUE KERBER: That’s a good question, and I hear it a lot. I actually don’t know. I mean, last year when I reached the semis at the US Open I, yeah, I thought that I can beat also the top players and not playing just good matches.

I had also a great prepare season before this year, and I think also mentally I’m a little bit stronger than last year. I have a great team right now around me that’s supporting me, so I think that’s everything together makes the change.