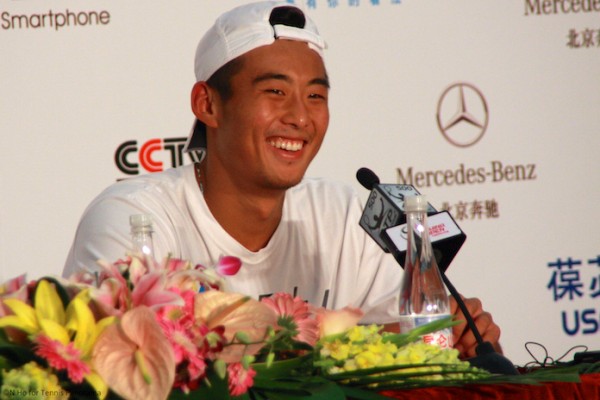 BEIJING, China – Before we forget Ze Zhang until the next China Open, let’s get to know him a little better.

Ze Zhang is 22 years-old (b. 04.07.1990) from Nanjing, China where he still lives. He plays right-handed and at 6’2″ is nicknamed “Big George”. He’s now at a career high ranking of 163 and projected to go even higher after his quarterfinal run here in Beijing. Since August 6, 2012 he’s been working with French coach Guillame Peyre who was invited by the Jiang Su provincial team but is hired by the national team.

Asked about the benefits of having a foreign coach Zhang says “I think because the foreign coach can provide me with something more enlightening, just like my coach right now who has already coached a lot of high‑profile players before. He’s certainly right as Peyre has previously coached Richard Gasquet who he upset here in the 3rd round. He also notes “I think in terms of single largest improvement he has already coached me how to handle every single ball. He has taught me how to be more confident than ever before.”

Like any rising player, his goal now is to reach the top 100 which he hopes to achieve by next year. In his quarterfinal match against Florian Mayer, he was 1 for 11 in breakpoints converted and that’s what he says he needs to improve on a lot. “Unfortunately, I don’t have a mature handling in terms of the critical ball. That’s the single largest gap that I have to me and the very important world players. That’s the gap.” admits Zhang.

So maybe we won’t have to wait until next year’s China Open to see him play again.