You are here: Home / Features / Sharapova Takes Out Li Na to Advance to China Open Final 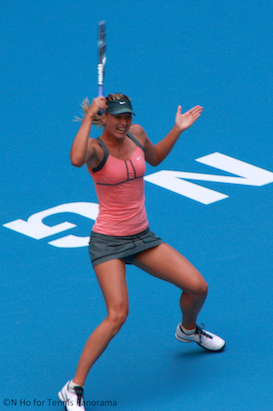 BEIJING, China – It promised to be a long, tight battle. Thirty minutes into the semifinal match between Maria Sharapova and Li Na at the China Open and we’re only in the fourth game. The crowd supplied a good atmosphere to an engaging contest where every point won or lost was cheered loudly. Even though it was clearly a Li Na crowd, the packets of Sharapova fans were not to be outdone. But the promise and the excitement eventually didn’t hold up. And after getting an early break for 2-1 and hanging on tight till the end of the 1st set, Li Na eventually unraveled and lost to Sharapova 4-6 0-6.

Through the first set, it was clearly Li Na who was dictating play. Her backhand was connecting on winners, and her forehand, which could get erratic, was steady and strong. Sharapova meanwhile, who has been playing some of her best tennis again here since the 2nd round was erratic and tentative. She committed three consecutive double faults to be broken in the third game. Li Na held steady to consolidate for 3-1 but the errors started creeping in and was eventually broken back for 3-3. Sharapova then faced a long, and what turned out to be a decisive service game at 4-4 that went to five deuces after being up 40-0. But her serve, which failed her previously when she was broken saved her this time for the hold at 5-4. Then more errors from Li’s game, that even her more reliable backhand was sailing long, and a tight first match went Sharapova’s way 6-4.

There was no turning back for Li Na in the second set as it was all downhill from the start. Two winners to 12 unforced errors tell the tale. All Sharapova had to do was stand in the middle (Sharapova had 1 winner to 3 unforced errors) and wait for Li to commit the error. Not the type of ending everyone was expecting and certainly not the the result most everyone in Beijing was hoping for. Sharapova is through to her first final at the China Open where she can win her first Premier Mandatory event of the year.

“I came into this tournament not playing extremely well in Tokyo, and I had a couple of days of practice here, “Sharapova said. “I really wanted to do well and get to the final stage of this tournament because I haven’t been, like you said, to the finals here.  I have played a few times, and I skipped last year.

“So I was hoping that from the first round on I’d really step it up and get better.  I feel with the tournament I have been playing and moving better.

“Yeah, as far as today, it was a really high‑quality first set and a few ups and downs, and obviously she had the lead in the first set.

“You know, I came back and then I broke her in that last game of the second set.  You know, there are a few key moments to that set, and it was important for me to take that momentum going into the second.”