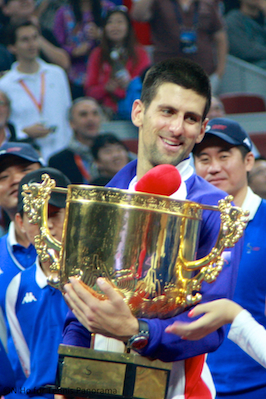 BEIJING, China – The player who has broken Jo-Wilfred Tsonga‘s dreams every time, has done it again. Novak Djokovic remains unbeaten at the China Open as he wins his third title here in four years defeating Tsonga 7-6 (4), 6-2.

Tsonga was the better player for most of the first set. He was dictating with his forehand and changing up the pace with his sliced backhand that Djokovic couldn’t get into his usual yo-yo rhythm. But it must be hard to keep your composure and maintain that certain level of play against someone, except for one walk-over win, you’ve lost to five times in the last couple of years.

As Tsonga was asked in his post-loss news conference “Is there an added sense of, I guess, pressure or frustration after the fact when you have played the same guy a few times this year and just haven’t been able to get over the hump?” Tsonga answered, “Yeah, of course there is some frustration, you know. I mean, you work a lot. You give of yourself, and you never get a reward. That’s why sometimes it’s tough.” So in the end, even if Tsonga got the initial break in the first set, and was able to get the two minibreaks back in the tiebreak, he goes for a big second serve down 4-5 in the tiebreak to double fault and eventually lose it 6-7 (4).

So close and yet so far, that Tsonga quickly surrendered a break in the first service game in the second set. With Djokovic much more steady and relaxed now, Tsonga kept pressing only to find his shots go long and wide. Game, set, match Djokovic.

Novak Djokovic hasn’t won a title since Miami and in the interim has lost the No. 1 ranking to Roger Federer. With this win in Beijing and three more big tournaments coming up, Djokovic targets to end the year as strong as he started it and reclaim the title of best player in the world.

“That’s the target, said Djokovic.  This will definitely help me in that race, but it’s still quite open.  There is still tournaments to come, big ones.  Shanghai, obviously the first 1000 event that is next week.  Everybody is playing there except Nadal.

“I want to try to get as far as I can in the tournament, obviously taking one match at a time as I always do. “