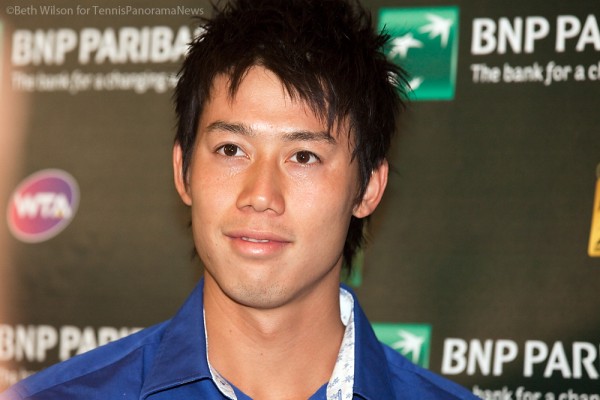 Kei Nishikori became the first Japanese player to win the Japan Open Tennis Championships in Tokyo on Sunday when he stopped the hard-serving Canadian Milos Raonic for the title 7-6 (5), 3-6, 6-0 for his second career ATP World Tour title. His first tournament win came at Delray Beach in 2008 as a qualifier.

Nishikori, from Shimane Prefecture in southern Japan, ranked No. 17 in the world and rising, delighted his home crowd with the win.

”To have won this tournament in Japan is a very happy occasion for me,” Nishikori said. ”I made an effort to approach today’s match as the challenger.”

”I wish I could have started off serving better,” Raonic said. ”He was reading my serve really well from the beginning and that usually doesn’t happen. I didn’t create the opportunities and go for it like the previous two days.’

“He just played too well. There’s not too much I could do. He played better than me and deserved to win. [In the third set], he started playing well, was reading me a bit more, and a few mistakes starting coming from me.”

“I have not been able to play well in Japan until now,” Nishikori said, “so I always thought perhaps I was not mentally strong enough to do so. But [after] the match against [Tomas] Berdych, something changed. I was able to play much better yesterday and today as well. On one side of my mind, I cannot believe I won the tournament, but at the same time, I feel that I’m happy I was able to do this.

“He (Milos) attacks on his returns and goes up to the net quickly. And he is willing to take risks. I watched him play [Andy] Murray. Despite the break in the first game, there were some dangerous moments in the first set. I tried to stay aggressive. I was able to continue doing so and was able to get the final set 6-0.”

“I would like to offer my congratulations to Kei Nishikori on becoming the first Japanese man to win the Rakuten Japan Open Tennis Championships title in Tokyo,” ATP Executive Chairman and President Brad Drewett said. Kei is a terrific player who is already a star at home in Japan and among the Top 20 players in the world. I’m sure this historic win over a very difficult field in Tokyo will give him great confidence and we look forward to seeing all that he can do. Kei has a very bright future on the ATP World Tour and we couldn’t be more proud of him.”

This was the youngest ATP final of the year with 21-year-old Raonic playing 22-year-old Nishikori in their first encounter.