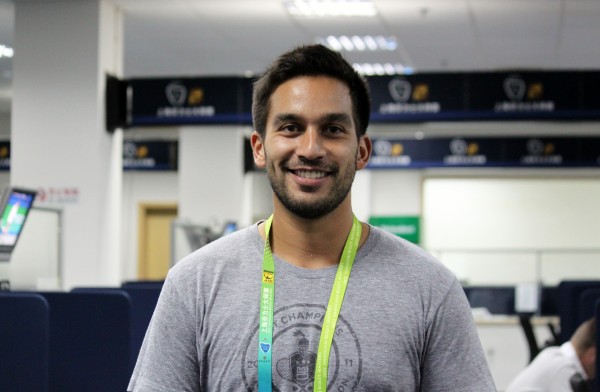 SHANGHAI, China – As a tennis fan from a small country, we ever hardly get the experience of cheering for our own. When Cecil Mamiit (career high ranking of No. 72) was playing his best tennis on tour, he was still representing the USA. But we Filipinos knew his descent and cheered hard for him. The Philippine Tennis Association (Philta) then approached him to play for the birth country of his parents and he has since helped revive the popularity of tennis in the Philippines by winning Gold Medals during the Southeast Asian Games when it was last held in the Philippines. He then helped in bringing in another American of Filipino descent to play for our Davis Cup team and now, proudly wearing the Philippine colors, Treat Conrad Huey is steadily climbing the doubles ranking on the ATP Tour (current ranking of No.  41). This year, Huey with his regular doubles partner, Dominic Inglot won his first doubles career title in Washington DC.

Covering the Shanghai Rolex Masters for Tennis Panorama News, I grabbed the chance to meet and interview my countryman, Treat Conrad Huey. He and his double partner here, Jonathan Marray may have lost in the second round, but Huey says has definitely felt the support of Filipinos here and especially in Malaysia as the tour made its way around Asia.

The Philippine Davis Cup team fell in the third round of the Asia/Oceania Group II to Indonesia last September, but it has certainly experienced a revival in results and support from the home crowd compared to some years back. Getting medals at the regional Southeast Asian and Asian games have also helped. Hopefully, it can only get bigger and better. As Huey has taken on the role of big brother and mentor to a couple of our younger, home-bred talents, his teammates and practice partners in Davis Cup, he only sees a bright future for them and for Philippine tennis.

On a lighter note, to know more about Huey and the Philippines, let me tell you that his favorite Filipino food is longaniza – a pork sausage very similar to chorizo. Meanwhile, his doubles partner Inglot loves his mom’s cooking of pansit. It is any kind of a noodle dish which was initially introduced to the Philippines by the Chinese but has since been Filipinized in flavor. And as the Philippines is an archipelago composed of over 7,000 islands, it boasts of beautiful islands and beaches. One place Huey would definitely recommend to his doubles partner is the island province of Cebu, where he has experienced the warmth and hospitality of its people aside from its white sand beaches when the Philippines hosted a couple of Davis Cup ties there.

Abigail Hinto is covering the Shanghai Rolex Masters for Tennis Panorama News. Follow her updates on twitter at @TennisNewsTPN.