You are here: Home / Features / Berdych or Tsonga, Who’s Next? 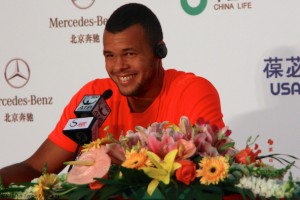 SHANGHAI, China ( October 12, 2012) – We’ve been looking at the next generation of ATP players for their significant breakthroughs for some time now. And with Andy Murray finally winning his first grand slam, the focus on them to deliver on their promise is only going to get bigger. But the breakthroughs have so far only come in spurts. Milos Raonic beats Andy Murray in Barcelona and Tokyo then falls in the next round. Kei Nishikori overcomes the pressure of playing at home by winning Tokyo, loses in the third round the following week in Shanghai. Bernard Tomic takes out seeds at the Australian Open showing versatility and chutzpah only to admit to buckling to the pressure of the calendar and defending points by the end of the year. And what’s even happening to Grigor Dimitrov and Alexander Dolgopolov?

Three of the ATP’s big four come from the same generation. Compared to the generation following them, Novak Djokovic, Andy Murray and Rafael Nadal have achieved significantly more, reaching the top 10, winning Masters 1000 tournaments or winning a grand slam as teenagers. The three have entrenched themselves thoroughly at the top that, along with Roger Federer, the focus at the big tournaments have mostly been on them. But what about the other members of their generation who, even compared to the young players now have achieved more early in their careers? Today, we saw two of those players, Tomas Berdych and Jo-Wilfred Tsonga face-off in the quarterfinals of the Shanghai Rolex Masters and have their 1-1 head-to-head tilt slightly in favor of one over the other.

It’s interesting to compare these two players who were born exactly five months apart (Tsonga b. 17.04.85, Berdych b.17.09.85). Jo-Wilfred Tsonga and Tomas Berdcyh have been switching places in the rankings the past year with Tsonga now at No. 6 and Berdych at No. 7. Both are Grand Slam finalists with two semifinals appearances as well. Berdych made his mark first, turning pro two years (in 2002) before Tsonga did. He beat Roger Federer at the Athens Olympics then won his only Masters title in Paris in 2005. Tsonga, a relative late-bloomer because of injuries, announced his arrival to the top of the game when he beat Rafael Nadal at the semifinals of the 2008 Australian Open showcasing both his power and touch. Like Berdych, he has one Masters also in Paris. Both have several wins against the top 4 and have even beaten them at the slams. But what does it take to make that one final step to winning a Grand Slam? Is it just a mental barrier, maybe a little bit more luck needed to be involved? Is the reason why we’ve been looking at the next crop of players because we feel that Berdych and Tsonga have already taken their games to their peaks?

Now compare what both have to say today after their quarterfinal match:

Berdych: Well, I would stay with the way what I’m doing. I believe myself that it is the right way to do it. You know, I hope that I’m going to be able to lift the (grand slam) trophy at least once in my tennis career, which hope it’s going to be in next few years. That’s it. You know, try, work hard, and that’s it. Now it’s tough to say like what you want to improve, better forehand, better backhand. It’s not about it anymore. It’s just the small details, all the things that have to become well in the right moment. I was playing really great in the US Open. Then come up the match I was playing against Andy, which the conditions was absolutely no playable at all. Our match was going on, then the next one they just stopped. So this is kind of things when you see it, you look at it, you say, Well, why it’s not me the match that gets stopped and I can continue next day? So you also need some luck to do it.

Today, in a close match, it was Berdych who edged ahead of Tsonga 6-3, 7-6 to reach his first semifinals at the Shanghai Rolex Masters. Based on the result and his more positive attitude about the future, will he be the first between the two to be the next new grand slam champion?

Abigail Hinto is covering the Shanghai Rolex Masters for Tennis Panorama News. Follow her updates on twitter at @TennisNewsTPN.