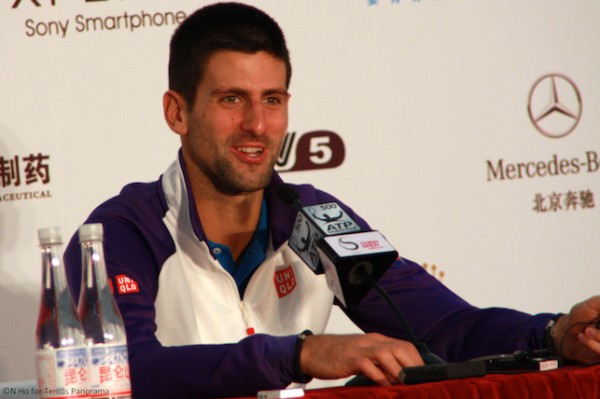 As semifinals Saturday at the Shanghai Rolex Masters gave us one installment of the big four match-ups when Murray defeated Federer 6-4 6-4, finals day gave us Novak Djokovic against Andy Murray in a repeat of the US Open Finals. It’s a one match advantage for Djokovic in an 8-7 head to head against Murray, but Murray had won their last two meetings, at the semifinals in the Olympics and that thrilling final at the US Open where Murray finally took home his first major.

Ironically, these two old friends and rivals have met the least amount of times among the big four. But it’s been more a matter of their ranking places, having spent mostly as No. 3 and No. 4 behind Federer and Rafael Nadal. Now that rankings have switched and rotated more recently, we may see more of these two facing against each other as we have seen it happen five times already this year.

Djokovic and Andy Murray are among the best returners on tour. But have we seen as much breaks of serve in a match between these two especially in fast hard court like Shanghai?

The first set saw six breaks of serve before Djokovic finally held serve again since his first service game for 5-4. A hold for Murray as well and the match was once more level at 5-5. Serving for a 6-5 advantage, Djokovic was easily holding at 40-0 only to see his lead slip away when Murray eventually breaks. Murray finally wins the first set 7-5 in 1 hour and 13 minutes.

What could have been a straight sets victory for Murray turned into a tight, tense, nervy affair when Murray failed to serve out the match at 5-4 and the second set went into a tiebreak. Saving five match points, Djokovic turns the match around and takes the second set 13-11 in a 20 minute tiebreak.

“It’s difficult to judge who was better because it was so close throughout the whole match,” Djokovic said after the win. We had so many rallies in three and a half hours; for a best-of-three set match it is a very long time. Could have easily gone the other way. He was five match points up. When I faced those match points, I tried to focus on each individually. He was so close to the victory that I cannot say I was the better player.

“I’m trying to focus now on the end of the season. I need to play well indoors. I need to try to stay consistent with my results and eventually get a shot at No. 1 of the world. It’s my biggest objective in this moment. It’s something I’m aiming for. Obviously this is going to be a huge confidence boost and is going to help me in the race for No. 1. As I said, it’s still not done. I still have to play well indoors.”

“It was a disappointing one to lose, “ Murray said. “I’ve lost tougher matches than that before in the biggest events. So I’m sure I’ll recover from it pretty well.

“The second set, I probably played a little bit better. But he came up, served very well on the match points. The one match point I had on my serve, he hit the forehand onto the edge of the line. On the game where I served for the match, he also came up with some good shots.

“It’s not like I threw the match away. I didn’t make any real glaring errors or anything. When I had my chances, he just served very well and hit a couple of lines when he needed to.”

“We had an incredible year so far with our matches, big matches in important events,” Djokovic said. “He definitely is a different player this year. You could see by the results he’s achieved. He’s more aggressive on the court and he’s definitely a danger to anybody on any surface.”

This marks the seventh different Masters 1000 series title for Djokovic. Up until Sunday, Murray has a perfect record in Shanghai, winning titles the last two years.

With the victory, No. 2 Djokovic is getting closer to passing No. 1 Roger Federer for the top spot in the rankings as he heads into the BNP Paribas Paris Masters and the ATP World Tour Finals in the coming weeks.