You are here: Home / Features / Sharapova Keeps Quest For Year-End No. Alive with Win over Errani 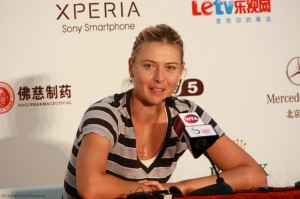 (October 23, 2012) In a rematch of the most recent French Open final which ended with the same score, Maria Sharapova defeated Sara Errani in the White Group 6-3, 6-2 in round-robin play at the WTA Championships in Istanbul on Tuesday.

The win still keeps her slim hopes alive in the race for World No. 1. Sharapova would have to win the title with Victoria Azarenka only winning one match and not making the semifinals.  Azarenka can secure year-end No. 1 with two victories in round-robin play.

In the beginning the matched looked as though it would be a marathon with the first four games lasting 30 minutes, the set 55 minutes. Errani took a 2-0 lead only to relinquish it to the Russian.

“I was happy about the way I started,” Sharapova said.  “Certainly the first few games went quite long.  When you give her a lot of time, she uses it quite well.  That’s what has brought her success this year.  I really tried to be more aggressive as the match went on.”

Sharapova continued, “She’s a player that likes time and likes to hit the high balls and use the dropshots and the angles.  Again, that is when you have time.

“I think if I’m playing my game well that she doesn’t have that time to create all those things she likes to and maybe goes for a little bit more than she would want to maybe on the serve or in the groundstrokes.”

Sharapova hit 39 winners with 22 coming from her forehand side. Errani hit only 6 winners but made 26 unforced errors.

This is Errani’s first trip to the yea-end championships. “Of course there’s a bit of tension when you’re playing the Masters for the first time,” Errani said, but I was okay, I was good. I played a good match – the first four or five games were so long – and I’m happy with how I played, but she was playing very strong and deep today. She was very tough.”