You are here: Home / Features / Serena Williams Tops No. 1 Azarenka at WTA Championships 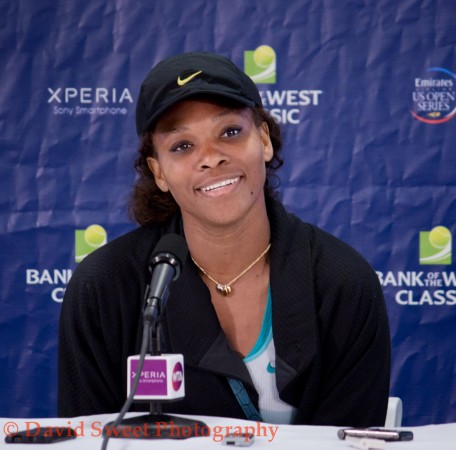 (October 25, 2012) Serena Williams completed a perfect 3-0 round-robin record in the Red Group at the WTA Championships in Istanbul with a 6-4, 6—4 win over No. 1 Victoria Azarenka. Williams raised her overall record against Azarenka to 11-1.

Despite losing on Thursday, Azarenka can still clinch the year-end No. ranking with a win in her next round-robin match. She’s 1-1 so far this week.

After a tight first set which the American won 6-4, the Belarusian jumped out to a 3-0 lead in the second, only to see Williams storm back winning the next 4 games.

Azarenka had serving troubles with 9 double-faults.

She’s a really good player, Williams said of Azarenka.  “I just was able to play better than I did my first couple rounds.  So like I said, that was what I was going to have to do going up against the No. 1 player in the world.”

“It’s been a lot of up and downs, Azarenka said of the match. “I had too many opportunities that I didn’t use.  She played really well.

“As usual she’s on a roll and everything, but I feel like I didn’t keep up the discipline I had, the right play I had.  When I had the right play I was in control most of the times, but I just couldn’t do it consistently today.”

“It wasn’t that easy but it wasn’t hard,” Williams said of the change in momentum in the second set.  “I wasn’t thinking about it too much, about swings and stuff like that.  I was just trying to get some serves in and play better.

“Like I said yesterday, what I felt was really positive about my match is I know I can do better.  So I knew that I would have to do better going up against this player and I knew that I could do better.”

Williams has now won 46 of her last 48 matches capturing Wimbledon, the gold medal at the Olympics in London and the US. Open.

Earlier in the day, Li Na beat Angelique Kerber of Germany 6-4, 6-3 in another Red Group encounter.

Azarenka will play Li Na next in round-robin play.

“Win or go home,“ Azarenka said of her match against Li.  “I’ll give everything I have to win because I still want to stay couple more days here and fight.

“Tomorrow is gonna be really, really important match, you know, so I have to give my 20% and try to win the match.”

“I think we play a good match.  She was playing amazing on the second, and I’m happy that I’ve been still focus and aggressive on the third.”

“I’m happy to be here and I’m happy how I play.  I just want to keep going and happy that I’m still alive.”

“It was a little bit up and down,” Stosur said.  “Second set got off to a good lead and then was able to hold onto that and win that second set.

“Then had a breakpoint early in the third in that first game and missed a return.  Then it was kind of like all the energy went out of me.

“Yeah, it was just like I got ‑‑ all of a sudden everything came to a head and the it was very difficult.  Then I got down another break, and from that point it’s very hard to win.

“It gives someone like Sara who makes you play that extra ball over and over again and you press a little bit too much.  Yeah, I certainly dug myself in too much of a hole to try and get out.”