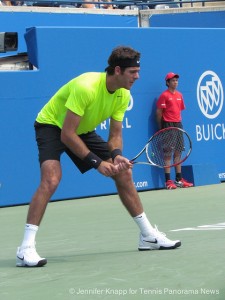 (October 25, 2012) From the ATP World Tour – LONDON – Juan Martin del Potro has qualified for the 2012 Barclays ATP World Tour Finals, to be held at The O2 in London from 5-12 November. Following Rafael Nadal’s withdrawal from the season-ending tournament due to injury, del Potro becomes the sixth singles player to qualify, joining Novak Djokovic, Roger Federer, Andy Murray, David Ferrer and Tomas Berdych at The O2.

Del Potro will be making his third career appearance at the season finale. His best performance came in 2009 when he reached the final. The big-serving Argentine has captured three ATP World Tour titles in 2012, at the Open 13 in Marseille, the Estoril Open, and at last week’s Erste Bank Open in Vienna. Del Potro is currently playing at the Swiss Indoors Basel where he advanced through to the quarter-finals with a 7-5, 6-1 win over American Brian Baker on Thursday.

“For me it’s a gift for my effort during the year,” said the 2009 US Open champion and current ATP World No.8. “Being in that tournament means a lot. It’s only eight players fighting for one tournament. It’s the best eight players of the year, so it’s very important to me. I’m so glad to be there once again. I will be fighting against the big names in London and maybe I’ll have a chance to make another final.”

Brad Drewett, ATP Executive Chairman & President, said: “We’re delighted to welcome Juan Martin back to the Barclays ATP World Tour Finals where he made such a big impact back in 2009 by reaching the final. He has one of the biggest games on tour and is an exciting addition to what will be a fantastic player field in London.”

Just two singles berths remain up for grabs, with the likes of Jo-Wilfried Tsonga, Janko Tipsarevic, Richard Gasquet and Nicolas Almagro among those in contention as players chase the last South African Airways ATP Rankings points of the regular season in order to qualify.

The Barclays ATP World Tour Finals again look set to provide a thrilling finale to what has already been a remarkable season on the ATP World Tour, with the year-end World No.1 ranking potentially coming down to the wire at the last event of the season in London.

Barclays ATP World Tour Finals – The Contenders
(Based on Year-to-Date 2012 ATP Rankings points as of 25 October 2012.)