You are here: Home / Features / Azarenka Clinches No. 1 Ranking at WTA Championships 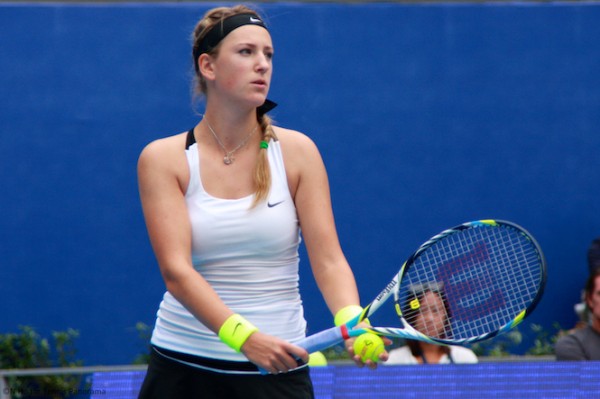 (October 26, 2012) Victoria Azarenka sealed the No. 1 ranking for the year by defeating Li Na 7-6(4), 6-3 at the WTA Championships on Friday in Istanbul. The victory for the Belarusian also moved her into the semifinals on Saturday where she’ll take on Maria Sharapova.

“It’s incredible achievement,” Azarenka told media.  “I’m really, really proud of that.  I still feel that I don’t want to really get into it too much because I’m still in competition and I would like to keep that focus for two more days I have left.  It’s the most that’s it’s going to take.

“But it’s important to stay a little bit grounded.  After that, I can enjoy my time and celebrate that.”

It was a career year for Azarenka who began the year with a 26-match win streak capturing her first major – the Australian Open. “Definitely this was a breakthrough.  It’s good to see women’s game, you know, raising its level so much more.  Especially over this year I felt like all the top players are kind of pushing each other to be better.  It’s great for our sport.

“If you look at the list of these people (Number one’s), it’s kind of difficult to believe that a little girl from Belarus is on that list.

“But it’s really incredible achievement.  When I started to play tennis I had this big picture in my head that I want to be there.  Back then it’s so far away.  It’s like pretty much touching the sky.”

Li Na despite the loss remains upbeat: “I think I still have positive to take away, but at least on this tournament I play No. 1, 3, and 5 in the world, so pretty good challenge for the self.

“End of the season at least I was healthy.  I didn’t have any injury.  So really looking forward for the next yeah, next season.”

Azarenka will play Sharapova on Saturday in the semis who demolished alternate Samantha Stosur 6-0, 6-3 to complete a perfect round-robin record.

“But it is different occasion.  It is a different place.  We played in the semifinals before, but actually I never played her in the Championships.  So it is new and it is not new.  So you can take it both ways.”

“I certainly didn’t want to play as long a match as I did in the previous round, Sharpaova said of her win over Stosur. “I wanted to do a better job of a few things and I think I did.”

“I had to play my best tennis until the end of the match because every game was a big fight,” Radwanska said.

Williams was undefeated in three matches in her Red Group and didn’t play on Friday.

The match between Radwanksa and Errani lasted 3 hours, 29 minutes and was the longest recorded best-of-three-set match in WTA Championships history.

“I think altogether of course I’m exhausted,” Azarenka said.  “I never played so many hours last three days, so was a lot of tennis.  Now for sure it’s going to be hard; no day off.

“I really need to be ready for tomorrow.  But I’m actually really happy that at least one of those marathon matches I could win and made for the first time semifinal.

“I was out of power,” Errani said.  “I was dead maybe from the second.  So I just try to fight.  In tennis you have to fight.  I just try to play point by point also if I was tired, and that’s it.  I think only about that, not other things.

“All the game were very long; also the one that I lost.  So just try to maybe push a bit more to make shorter the point, but was tough.

“I’m here playing in the master with the best players of the year.  It’s good results for me.  I won one match; this is one was very tough.

“I just try everything on the court, try to give my best, give everything, and this is it.  This is what I did.”

“I was happy to come back.  Actually I start pretty good in the third set, but obviously she’s a big fighter so she didn’t give up as well.  So I really had to play my best tennis until the end of the match, because every game was the big fight.”