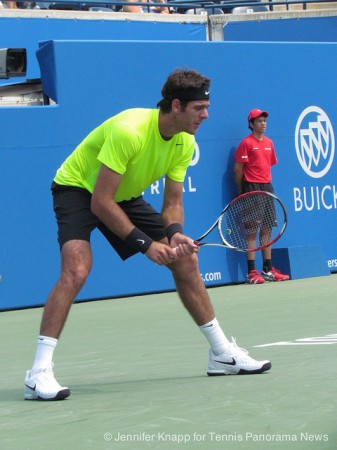 The win for the Argentine is his first of the year versus the Swiss to whom he had lost to six times in 2012. It’s Del Potro’s 13th overall ATP World Tour title and fourth of the year – he won Vienna last week.

“It was an unbelievable final, the match was really close,” said Del Potro. “After six losses, it was a big win for me. I was fighting all the time. I got lucky in the end, but I felt that I played a really good match.

“I was focused on my defensive game, keeping the ball in play and building my confidence in order to break his serve. It was tough for both of us. I was to enjoy this title, then get ready to play in Paris and London.”

“Always, playing against Roger is a pleasure,“ said the Argentine in an on-court interview. “We know he’s the best player ever in this sport.”

Federer was seeking his sixth Basel crown and 77th career title to tie John McEnroe for third place in the Open Era.

“You deserved it,” Federer told Del Potro. “You had a couple of tough losses against me this year and I’m really happy for you.”

“I thought overall I played pretty good. He got off to a bit of a better start, but it was close. He served well at the beginning, which made him the better player in the first set. The second set was close. He didn’t play a very good tie-break and then I had my chances early on in the third. I couldn’t break, despite doing the right things, but then I didn’t play a good tie-break myself.

“He has been playing really well this season. I have played him seven times. Every time, I can see he is extremely tough. He has been making the right improvements throughout the year. He is, basically, right there again.“