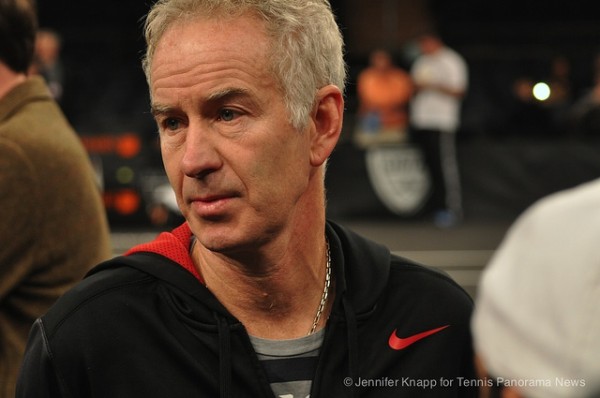 (November 6, 2012) Since the release of the United States Anti-Doping Agency’s report on how Lance Armstrong gamed the system to avoid testing positive for performance enhancing drugs, many have questioned whether something similar could happen in tennis.

Indeed, one of the doctors implicated in the Armstrong case for orchestrating a doping regime for the entire United States Postal Service cycling team also treated tennis players, including Sara Errani and Dinara Safina.

When asked about doping in tennis at a PowerShares Series event in Philadelphia, John McEnroe expressed confidence in the International Tennis Federation’s anti-doping program.

“I think you can take any sport, but I think it’s as rigorously tested as any sport other than the Olympics that I’m aware of,” McEnroe said. “Maybe more so than any other sport, whether it’s football, basketball. I’ll bet you there’s way more testing and way more stringent testing in tennis than in any of those team sports.”

“We use WADA (World Anti-Doping Agency), and we’re on the Olympic Code, which is a pretty stringent code. Players do out-of-competition testing that’s unannounced. They have to give their whereabouts for one hour of the day, every day of the year. If they’re not where they say they are, that counts as a positive test against them. We have the rules in place. We have, I think, the best drug testing system around that I’m aware of.”

Though Courier put his support behind the ITF’s testing program, he acknowledged that there was opportunity for players to take advantage of the system.

“I think that given the great rewards that are out there in tennis, and given human nature, people will cut corners where you give them leeway to do so. I think you have to put your head in the sand to think that people wouldn’t try and cut corners given what’s on the line if you do well in our sport. Look at Wall Street. People cut corners there because there are great monetary rewards. Anywhere you go in the world, this is human nature. We’re not immune to that. I don’t think we have a problem, but we’re not immune to that.”

“Everyone wants to see a situation where there’s a level playing field,” McEnroe said. “So it continues to be something that would be an issue for all sports, I would think.”

Amy Fetherolf‏  was in Philadelphia covering the PowerShares event for Tennis Panorama. She is the founder of the tennis news site Drop Shot Dispatch and a co-founder of the new tennis site The Changeover.  Follow her on twitter at @AmyFetherolf.