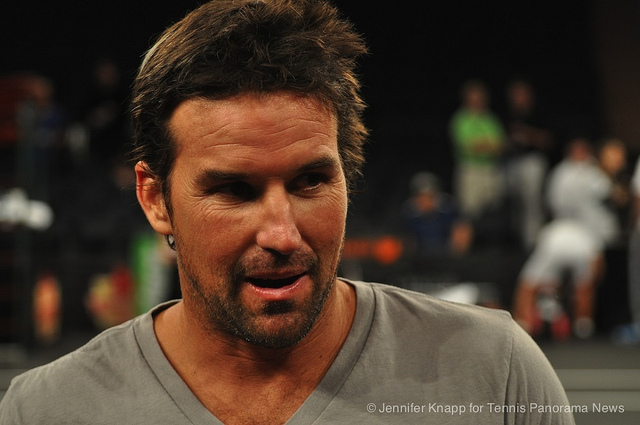 “It’s just a thrill for me to be back out here competing in front of the fans again,” said Rafter. “I had never played in this building, so what an added thrill, and a dream come true for me. I can’t thank the fans enough for coming out tonight to watch us play, in light of what this part of the country has been through lately. I hope we were able to provide some good entertainment.”

Rafter who promised before the match that he would serve and volley on every chance he could, used his aggressiveness to take down Pete Sampras 6-3 in the first semifinal of the night. Sampras was sporting knee-high socks due to a calf strain.

In the second semifinal, New York’s own John McEnroe, zoomed out to a 4-0 lead over Andre Agassi. Agassi eventually gained back the two service breaks to draw even on serve at 4-5, but McEnroe broke him to seal the match 6-4.

For Rafter, this was his first time playing in Madison Square Garden. “I’m excited,” he said before the matches began. He said that had attended the Knicks game on Sunday and it made him very nervous. He said that he’d hope to play well and that he did.

The win moves Rafter into a tie for third in the 2012 PowerShares Series rankings with Jim Courier.