You are here: Home / Features / A Tale of two British Slam Champions – Day Three of the ATP World Tour Finals

(November 8, 2012) LONDON – It certainly was a tale of two Grand Slam Champions on Day Three of the ATP World Tour Finals, London. 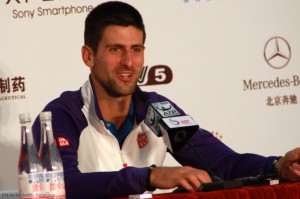 At the end of the day session, Andy Murray was not quite able to capitalise on his fast start after taking the first set off World Number 1 Novak Djokovic in just 44 minutes (6-4).

But Djokovic needed no invitation to punish some sloppy play by Murray in the second set, as fans on Twitter commented in wry amusement at his outfit including gold shorts.

Although Murray clawed his way back into contention in the decider, but in the end at key moments in the last few minutes, Djokovic denied Murray’s attempts to win another three set battle.

“The last two minutes of the match probably is what decided it,” said Murray.

“You would hope that one game wouldn’t decide the outcome of a whole match.”

Djokovic said: “I didn’t expect anything less other than a tough match that went down the wire and was decided on the last point.”

Whereas fans had reasonable expectations that Murray would be able to repeat his US Open success against Djokovic, Wimbledon’s wild-card Doubles Champions continued their dream partnership by booking their berth in the Semi-Finals.

Marray and Nielsen started brightly, and stood toe-to-toe with the established pairing of Nestor and Mirnyi, building a commanding position in the first set tie-break.

They did well to stay within the single break, but the crowd were treated to another of their now thrilling Match Tie-Breaks.

The scoring was nip-and-tuck throughout with the British/Danish team missing their chance to close out match point at 9-8, allowing Nestor/Mirnyi to turn the screw, as they had to save match point at 9-10.

Nestor’s volley sailing long saw the wonder-boys secure themselves a place in the semi-final.

“We can enjoy the next match really.

“There’s no pressure on us again really.

“We weren’t here just to make up the numbers.”

What started out as a match of two men, seemingly intent of beating the fluff out of the tournament tennis balls, resulted in a comfortable deciding set for Berdych, who continued his head-to-head bettering of Tsonga.

Both men came out hitting hard and flat and initially there was little variation from either.

The first set saw Tsonga dig himself out of potentially tricky sands, and at times throughout the match just seemed to be off his range a little.

In fact it looked as though maybe missing the chance to break at three-all was playing on Berdych’s mind in the next game, as it was his turn to tough out his service game.

Tsonga looked to be taking a bit more initiative at the later stages of the first set, and when he put together rallies moving Berdych left and right, it looked as though he had finally got the measure of him.

But carelessness crept back into Tsonga’s game, with Berdych breaking at 5-5, consolidating to take the first set.

Tsonga seemed to come alive, taking the second set with two successive aces, but he was frustrating to watch, even then.

Tsonga failed to capitalise on that momentum, squandering chances to break Berdych in the first game of the final set.

That was all Berdych needed, breaking Tsonga, and holding with conviction to lead 4-1.

Tsonga’s forehand errors made for a shocking graphic shown on screen during the third set, and at 1-4, a break to love meant a quick end to the match.

Berdych sealed the final set 6-1, and Murray fans are getting their calculators out to determine the possible permutations to go further after the round-robin stages.