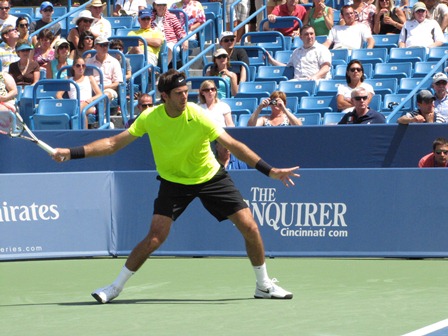 ( November 10, 2012) Juan Martin Del Potro claimed the final spot in the semis finals of the ATP World Tour finals on Saturday by stopping Roger Federer 7-6 (3), 4-6, 6-3 in their last round-robin match. Del Potro will face Novak Djokovic in the semifinals Sunday during the day, while Federer plays Andy Murray in the evening session.

It was the Argentine’s second straight win over the Swiss. Del Potro stopped Federer in the final of his hometown tournament in Basel Switzerland. The loss snapped Federer’s 12 match winning streak in the year-end tournament.

“It’s a little record, but really tough to do it,” Del Potro said of the victory. “To beat Federer is not easy, for sure. But I didn’t think about the semis or trying to qualify for the next round. Just was thinking about my match, doing the same things like in Basel.”

“Good effort (from) his side to get me twice in a row now,” Federer said. “I hoped I didn’t have to lose against him again today.”

“Now you have three big names in the semifinals, and one big guy,” said the 6’ 6” Del Potro.