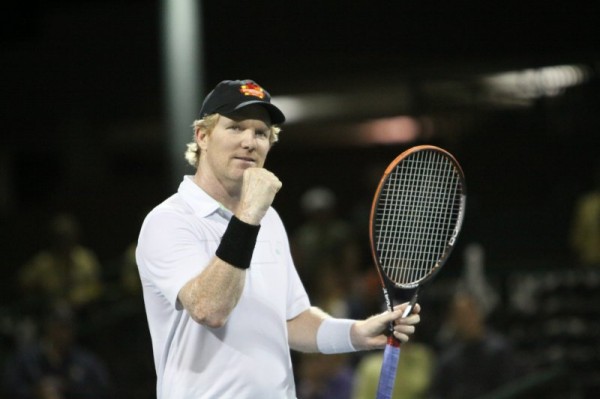 (November 10, 2012) ATLANTA – The PowerShares Series came to Atlanta tonight for the second leg of its southern swing. On Friday night in Tampa, Jim Courier, in front of his hometown crowd, pulled out a narrow 8-7 (2) after being down 1-5.

It’s a very different feel at this event- definitely not a typical tour stop. The night starts with a video montage, highlights of all the PowerShares Series players in their heyday set to loud rock and roll. As the players enter via spotlight, another montage of their personal highlights plays with more raucous rock and roll. The Atlanta program featured some big names, with a total of 19 grand slams between all the participants. The format features two semifinal matches of 1 regular set, then an 8 game pro set final.

Courier had a different path in Atlanta, taking on Michael Chang in the first match rather than Mats Wilander. Before the matches, each player spoke to the media.  Chang says its a little different for him in his forties. “Our body just doesn’t respond. That’s just normal. It’s been fun, but we definitely have to work in order to compete well. I think from a strategic point of view, I’m a better player.” “It’s a lot more fun- interactions with the crowd. At the end of the day we all have egos. We want to win.” For Courier, it isn’t all that different from the tour; “I don’t worry too much about it. I just get out here and go. Get into grind mode. Head down moving forward. It’s fun!”

The match started with Chang serving- or trying to serve. As he stepped to the line, a baby began crying. It looked like he was going to try to play through it, but paused just before his toss. He looked to the child, then to Courier, remarking that ” its a dad thing” Courier said “he wouldn’t know” Play began as the baby settled in. Apparently Chang didn’t, as an early break went to Courier. On Courier’s serve he held, but with a bucket list- “successful serve & volley to Michael Chang. You saw it here first.” with laughter from the crowd. It seemed Courier caught fire until Chang asked what side of the bed he woke up on. “Center- very zen.” After a couple of errors, he finally held off Chang. Both players showed the hallmarks of their game, Chang running down balls, Courier firing from the ad corner, running around backhands. Despite the scrambling and a break back, Courier was too much, breaking again to close the match at 6-3.

A short intermission followed, with Chang out helping some kids win Prince racquets by hitting targets. He fed U10 balls to the kids and gave then an assist with hitting the target. All the kids won a racquet, mostly thanks to Chang!

John McEnroe and Mats Wilander were the second semifinal. Wilander seemed to agree more with Courier’s assessment of the demands; “You’re trying to channel your concentration and focus into two hours, which is what you’re really good at if you’re playing professional tennis.” McEnroe, who has more points than anyone else in the series, said “It’s tough to do it back to back at this point, especially against this competition. Sometimes it’s tough to get that last point at the end. The court can beat you up. Staying injury free is a constant. We’ve got a good trainer. He takes good care of me. You have to work at it all the time. One of the factors is time. You have to take some time. It’s almost more important than practicing. You have to keep with it or you have no chance.” It looked like he needed a bit of service practice early on, as he was broken in the first game. The first point went to Wilander on a net cord. He apologized , but said he was not sorry. The crowd loved that! Early on, it seemed McEnroe had forgotten what his game was, rallying from the baseline much more frequently than making forays into the net. Once he moved in, momentum swung his way. Some service aces on his part didn’t hurt either. After getting the break back, McEnroe turned up the pressure, but Wilander stiffened his resolve and the games got longer. Wilander was often corner to corner and McEnroe had quite the number of volleys and overheads. He ultimately held on, 6-3, to earn another tiff with Courier in the final for a second night in a row.

After a very short intermission, they went at it just like the clock was turned back, only the groans from the players were a bit more frequent. Courier opened serving, going big right away- 2 aces and a service winner for the hold. McEnroe had a bit of struggle to hold for 1-1, but was able with a little encouragement from the crowd. Courier kept bringing the heat off the ground and from the serve all match. McEnroe soon matched him, holding easily with service aces, winners, and his usual characteristic touch volleys. Both men went corner to corner, with few mistakes and most points earned rather than given. Courier tried a bit of McEnroe touch while up big in a service game, much to his embarrassment. He asked McEnroe for some help, which he obliged with a demo volley. He then asked Courier for help with his forehand. That would have to wait until later.

Joking aside, the match turned a bit more serious as McEnroe turned on the pressure at 6-6, forcing 6 deuces. At one point, Courier asked if they could flip for it and McEnroe surprisingly agreed. They didn’t, but Courier held for 7-6. It turned out the push was too much for McEnroe, as he was broken for the match, 8-6 Courier.

“It’s always special to win and it’s nice to take over the top spot, but we have plenty more ahead of us on this tour,” said Courier. “Andre is going to be coming on strong to compete in these last four events, and John’s been so consistent all season long. So I expect an uphill battle to try and finish in the top spot but it was great to be back on top in Atlanta.”

Herman Wood was in Atlanta covering the PowerShares Series Champions Shootout at the Gwinnett Center  for Tennis Panorama News, follow him on twitter at https://twitter.com/hermanewood