(December 2, 2012) No. 11 Nicolas Almagro stopped the recently retired Andy Roddick 6-4, 7-5 on Sunday at the Miami Tennis Cup exhibition event held at Crandon Park, the home of the Sony Open.

The win marked the first time Almagro had never take a set off of Roddick. While Roddick was on the pro tour he was 2-0 versus the Spaniard going 4-0 in sets.

“I think it was a really good match, and he’s a very good player,” Almagro said. “I’m really happy with my game, although I think I can do better, but it’s the end of the season, and I’m a little bit tired. I’m happy to be the first champion of the Miami Tennis Cup and I think it’s a fun and enjoyable tournament. I hope to be back next year”

In between the hard-hitting rallies, the players mixed in some “hit and giggle” tennis which entertained the fans.

“I enjoy playing tennis still, and it was never about me not enjoying tennis,” Roddick said after the match. “It was about me not being able to commit to being a professional tennis player.”

“I enjoyed myself and it’s nice for me to come back in a competitive atmosphere. I’ve been happy with how I played and I’m glad they had me here. I think the crowd have enjoyed the tennis they’ve seen.”

So what’s next for the 30-year-old American? No training certainly for Roddick  but more golf. He’s back to full husband duties following his wife model-actress Brooklyn Decker around.

“The tables have turned.” 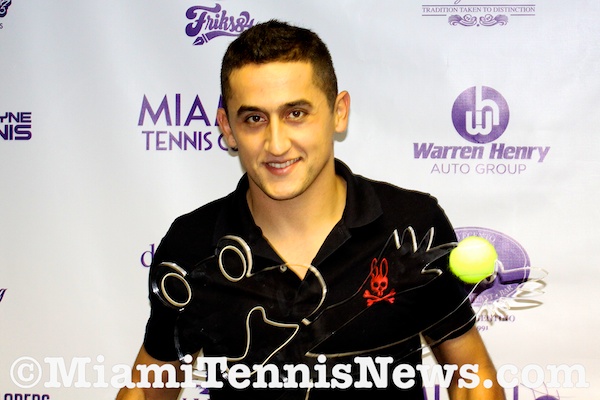