(January 2, 2013) NEW YORK, NY – After a hiatus longer than Rafael Nadal’s current one from the tour, Kourtin’ Karen is back with her weekly scoreboards. A brief review of the previous week in the world of tennis news, on and off-court.

Eleven- time major champion and current world No. 4 Rafael Nadal has withdrawn from the Australian Open due to a continuing stomach virus.

The ailment caused Nadal to withdraw from this week’s World Tennis Championship in Abu Dhabi.

Rafael Nadal has been off the tour with a knee injury since his second round loss at Wimbledon in June.

Andrea Perkovic  may join Nadal  on the Australian Open sidelines as the German suffered a meniscus tear of her right knee during her Hopman Cup match.

Maria Sharapova pulled out of Brisbane with a right collarbone injury. 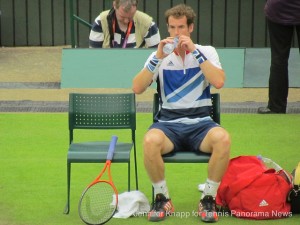 Andy Murray has been awarded an Order of the British Empire (OBE).

“It is with incredible pride that I have been named in the New Year’s Honours List to receive an OBE from Her Majesty the Queen for services to sport.

‘This has been an amazing year for British sport and I am proud to have been able to play my part.

“I reached my first Wimbledon final, competed and won gold at the London 2012 Olympics with Team GB at Wimbledon, and then won my first grand slam title at the US Open.

“Being recognised in such a way at the end of such a great season is the finishing touch on 2012. Thank you all for your support, I hope everyone has a very happy New Year…..and here’s to 2013!”

In Brisbane Caroline Wozniacki was spotted with a large ring on her on her left ring finger.  Her boyfriend, golfer Rory McIlroy had to deny there was an engagement and his management company issued the following statement:

“On behalf of Rory McIlroy, I would like to confirm that he has NOT become engaged to Caroline Wozniacki as was originally reported in Australian press. Rory is in Australia to support Caroline before he heads in January to Abu Dhabi.”

The ring which was a Christmas gift was…just a gift.

”It’s not an engagement ring,” Wozniacki said.  ”Those rumors once again I’ll have to shut down and say we’re not engaged … not yet anyway.”

Love is in the air

Novak Djokovic has a scare at Hopman Cup on Monday. A crowd barrier collapsed while he was signing autographs for fans following his singles win over Andreas Seppi.  The barrier hit the Serb’s legs but he said he was fine.

Novak Djokovic signed with IMG while Rafael Nadal is leaving IMG to begin his own management company.

Also on the business front:

Ad – Out of Davis Cup

Spain’s David Ferrer and Nicolas Almagro told Sport360 that they may not play the February tie against Canada.

Novak Djokovic has not cornered the market on donkey cheese as had been reported by British newspapers.

“I did not expect this story was going to get so much attention, and everywhere in the world, too. It is not completely true that we have bought the whole supply of donkey cheese, even though it was the first time in my life I heard that donkey cheese existed.”

Working in a coal mine

Retired Pros Marcelo Rios and Guillermo Coria will play an exhibition match inside El Teniente, the world’s largest copper mine.

Speaking of exhibitions, Djokovic captured the World Tennis Championship in Abu Dhabi this past weekend.

Tournaments and events this week in Auckland, Brisbane, Chennai, Doha, Perth and Shenzhen.

(Karen Pestaina is the woman behind Tennis Panorama News. She freelances for various media outlets in and out of tennis and has worked for many a broadcast news entity. She witnessed her first live tennis match as a young child at Forest Hills when Guillermo Vilas upset Jimmy Connors to win the 1977 US Open. This branded her as a Vilas fan for life. Follow her on twitter @TennisNewsTPN )