You are here: Home / Events / Tennis Players and Chefs Serve Up a Feast for Charity at Taste of Tennis 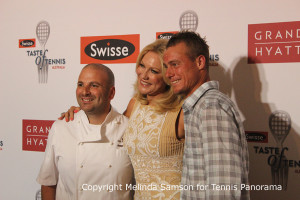 (January 10, 2013) MELBOURNE, Australia – A service game of a different kind was on the menu for the tennis stars who attended the 4th Annual Melbourne Swisse Taste of Tennis event held at the Grand Hyatt Hotel on Thursday night.

Players joined with chefs from Melbourne’s top restaurants to serve up gourmet treats to A-list guests in the name of charity.

Many top 20 ATP and WTA players featured among the guests at the event which raised money for Diabetes Australia and the National Institute of Integrative Medicine. Top ten players Janko Tipsarevic and Richard Gasquet graced the red carpet, along with other notable players including Marion Bartoli, Marin Cilic, Kevin Anderson, Lucie Safarova, Anastasia Pavlyuchenkova and Ivo Karlovic.

Former world No. 1 Lleyton Hewitt paired with celebrity chef George Colombaris to kick off the evening with a special presentation on stage before chefs and players combined to act as food servers, handing out small gourmet delights throughout the night.

Celebrities and chefs began arriving at the venue from 6.30pm sporting a wide variety of outfits based on the ‘elegantly casual’ dress theme. Many of the men came smartly dressed in jeans, while Marion Bartoli and the Rodionova sisters glammed up the red carpet in sky high heels and sleek dresses.

British Fed Cup captain Judy Murray is known to tweet her love of desserts to her 49,000 plus twitter following, and expressed her delight at the event’s offerings. She said “we’ve had a great time because to be able to go around and try small amounts of lots of different things is great. I think the trick is to pace yourself so that you have enough room left for desserts.”

Murray also spoke of her hope for the British girls at the Australian Open starting on Monday and said she is hopeful for a good run from Heather Watson and Laura Robson who have both recently broken into the top 50 singles rankings for the first time.

Swedish doubles specialist Robert Lindstedt enjoyed the social aspect of the evening and said it’s a welcome break from the day to day. “It’s great. It’s nice for the people to turn out where most of the guests are not players so it’s quite nice.” He said that on tour “we enjoy good food. We always try to find maybe not always the nicest restaurants because they’re a bit expensive but we always try to eat well so food like this is what we look for.”

Serbia’s Nenad Zimonjic said he loves eating out at restaurants. “It’s something that I enjoy doing and also traveling around the world I have the chance to try different cuisines. But when I’m at home I like a home cooked meal and I’m really lucky that my wife cooks really well so I enjoy that as well.”

Silent auctions were held throughout the night to raise money for the elected charities. Items up for auction included signed memorabilia of international sporting stars such as Tiger Woods, Sebastian Vettel and Cristiano Ronaldo, as well as experiences including dining packages and the opportunity to have a personal chef serve you at your home.

The Norman Brookes Challenge Cup and the Daphne Akhurst Memorial Cup were also a popular attraction on the night, with guests lining up for the chance to hold and have a photo taken with the Australian Open championship trophies.

Jaclyn Stacey is a Melbourne based freelance journalist covering the Australian Open tournament as media for Tennis Panorama News.  Follow her Australian Open updates on @TennisNewsTPN. Follow her persona @JackattackAU.
All photos by Melinda Samson who runs the site Grand Slam Gal. Follow her on twitter @Grandslamgal.
[nggallery id=70]