You are here: Home / Features / Azarenka is Ready for Melbourne, Looking Forward to Madison Square Garden 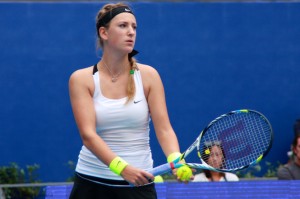 ( January 10, 2013) MELBOURNE/NEW YORK –  Prior to her participation in the Australian Open draw in Melbourne on Friday morning, No. 1 Victoria Azarenka took time out for an international conference call to promote taking part in the BNP Paribas Showdown on March 4, 2013 in Madison Square Garden where she’ll take on Serena Williams.

Azarenka who pulled out of the Brisbane International last week due to a big toe injury says she ready to go in Melbourne: “I’m feeling really good. If you’re asking about my foot, it’s feeling much better … the last couple of days. The scary part is in the past as it happened in Brisbane. I’m really glad … I can practice full time right now.”

This will be the sixth annual BNP Paribas Showdown as part of Tennis Night in America on World Tennis Day. In the opening match, Victoria Azarenka will take on Serena Williams followed by Rafael Nadal’s return to action in the US after an injury layoff as he plays Juan Martin del Potro.

For Azarenka this will be her first time playing in “the world’s most famous arena. ” I’m very excited and once I heard about this opportunity I said yes right away, Said Azarenka. “It’s something really magical to be a part of this event and play at such an amazing facility.”

Coming into the Australian Open as the defending champion and into the 2013 season in general, is she under the pressure of expectation?

“My approach to this year is the same as every year,” said Azarenka.  “I try to do my best; you set up priorities and goals for the tournaments. I don’t really want to defend anything I’m here to try and win another title. That’s how I look at it…and at the end of the year try and get to the championships because that is the point we all know that you we are being pretty consistent throughout the whole year. My main focus and attention will be on the Grand Slams.”

“The season has started already and the Grand Slam season starts here right now. I think women’s tennis is great, competitive atmosphere right now… There are a lot of girls who can show some great tennis. For me personally, I’m very excited to be a part of this competition. As for who I have my eyes on, I’m not sure. I’ll have my eyes on the ball (laughs) and on me. The top ten and the rest of the players are the ones to watch for. I’ll be looking forward to whoever I play.

The most I’m looking forward to is having a great match and I hope the crowd enjoys it and I can’t wait to be a part of this match, Azarenka said about he future BNP Paribas Showdown match versus Serena Williams. “I visited Madison Square Garden during the US Open and it was under construction and I was absolutely amazed. As a kid you watch all those events coming up – concerts and the games and you dream about it. I have it locked in my mind and for me to actually be there will be an honor.”

The BNP Paribas Showdown is part of Tennis Night in America and the inaugural World Tennis Day.  More information about World Tennis Day events and the BNP Paribas Showdown matches in New York and Hong Kong can be found online at www.WorldTennisDay.com. The Hong Kong event will feature John McEnroe against Ivan Lendl and Caroline Wozniacki against Li Na.