You are here: Home / Features / Serena Williams Rolls Ankle and Opponent in 6-0 6-0 Rout 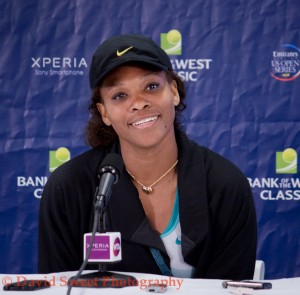 (January 15, 2013) Despite five-time Australian Open champion Serena Williams destroying Edina Gallovits-Hall 6-0, 6-0 in her first round match at the Australian Open, the real story of the match will be the state of the American’s right ankle after a first set fall.

Nineteen minutes into the match, with Williams up 4-0 in the first set with Gallovits-Hall serving at  15-0, Williams fell on the court grabbing her right ankle. The 15-time major champion was helped up from the court and walked on her own to her chair and her right ankle was taped by a trainer.

“But also at the same time trying to gather myself together and trying to make sure that I can continue.”

“I think I was really, really close to panicking because a very similar thing happened to me last year, almost on the same side, the same shot,” Williams added.

“So I almost panicked, and I thought, I can’t do that.  I just have to really remain calm and think things through.”

Williams came back from being taped to win the next four point for a 5-0 lead and held serve to close the first set 6-0 before getting her ankle taped again.

Williams lost a mere 6 points in the second set not allowing her opponent any games.

Williams hit 18 winners, five aces and won %94 of her first serve points in the match.

“I’ve been injured before.  I’ve played this tournament with so many injuries and was able to come off pretty on top.  So for me it’s just another page and a great story to tell the grandkids one day.”

Williams will play  Garbine Murguruza in her next  match.

“Oh, I’ll be out there, ” said Williams. “I mean, unless something fatal happens to me, there’s no way I’m not going to be competing.