You are here: Home / Features / Federer Strolls Past Paire To Gain Second Round of Australian Open 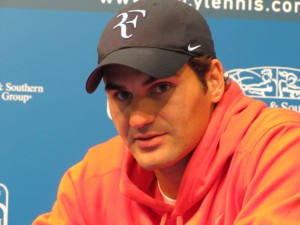 Federer broke Paire in the opening game of the match and again at 4-2 to serve and seal the set at 6-2 in 25 minutes over the 46th ranked player.

The Swiss broke early in the second set and early and often in the third set to capture the match in 83 minutes.

At times Paire seemed listless as though he wanted to leave the court as soon as possible.

“I started with the early break, and then saved a few break points, and then had the lead ever since,” Federer said.

“So obviously when you’re in the lead, you feel better, you feel less pressure, you try a few things to see if those works and then you have options up your sleeve.

“I’m obviously very happy with this first‑round match, so total control.  He can be a tricky opponent, you know, but I guess his playing style doesn’t disturb me that much overall.

“I’m happy I was able to play a clean match out there today.”

Federer played aggressively winning 25 of 31 point at the net.

Federer will play the winner of the match between qualifier Dudi Sela of Israel or Russia’s Nikolay Davydenko.

“But I played Sela maybe once or twice before,” Federer said, “so I know him a little bit.  Obviously Nikolay, I know him, you know, a whole lot more.  He’s my age.  He played, I don’t know, maybe 15 times.  I played him at a time when he wasn’t also in his best streak and in his best years, really, and he was in the top 4 or top 5 for a long time.

“I played him in the semis of the Grand Slams and at the World Tour Finals when he beat me.  Then he got me again in Doha, and I played him here the following week where it was a very difficult draw for me to have and I found a way.  You always have to expect that out of Davydenko to face if I were to play him, and not the one who’s not been playing so well.

“It was two years ago I think he really struggled with his serve, but seems like he’s coming back around.  I had a very close match with him in Rotterdam last year.  Should have won in two; ended up being 4‑All, Love‑40 in the third.

“So it’s nice to see him playing well again.  And if I do play well against him, you’re aware that he is a top player who can do a lot of damage.  I better be well prepared and play well.”