You are here: Home / Features / Sharapova Dishes Out More Bagels in Second Round of Australian Open 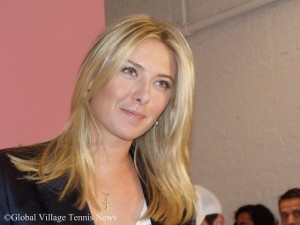 (January 16, 2013) Maria Sharapova has now won 24 straight games at the Australian Open. The Russian served up another double-bagel 6-0, 6-0, this time to Misaki Doi in 47 minutes, yielding a mere 15 points to the Japanese playe in second round play on Wednesday in Melbourne. Sharapova also won her first round encounter against Russian countrywoman Olga Puchkova by the same score.

No. 2-ranked Sharapova has been dominating in her play.

“I’ve been playing really aggressively and doing the right things,” Sharapova said. “It’s not easy to be up so much because you can have a few let-downs. You just have to try to concentrate.”

“My focus is always on the next point and to try to win as many of them as possible.  When you have your chances and opportunities, little doors that open up, you try to take them.

“Without looking at the scoreboard, I don’t want anyone to know what score it is on the scoreboard just by looking at my face or my attitude.  I try to play every single point like I really need to win it.”

Venus Williams won her second match against Alize Cornet and will play Sharapova next.

“There are certainly no secrets coming into that matchup,” said Sharapova.

“We’ve played against each other many times.  You know, despite the fact that she might not be seeded high or didn’t play for a little bit, she’s still a very experienced player and a tremendous athlete.

“Going out there, there won’t be too many secrets.  I hope for it to be a great match.”

The last woman to win consecutive 6-0, 6-0 matches at a major was Wendy Turnbull at the 1985 at the Australian Open.