You are here: Home / Features / Tsonga Unhappy But Eases Through to Australian Open Third Round 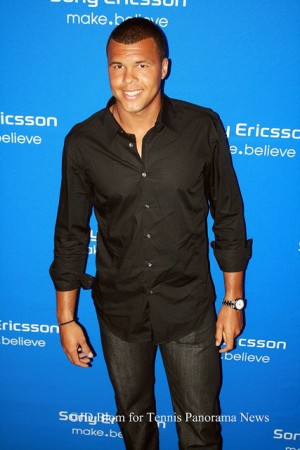 With the mercury tipped to top 39°C (102.2°F) on Thursday at Melbourne Park, Tsonga clearly struggled with with the rising temperatures early on in the match. He became openly frustrated with his inability to get moving on the court and looked like he had just stepped out of the shower throughout the duration of the match.

The 2008 Australian Open runner-up needed just one break in the sixth game of the first set to claim the lead in the match.

He immediately went down a break at the beginning of the second set. He managed to break back with Soeda serving for the set at 5-3 30-40 by coming into the net and forcing his opponent to make the error. The set went to a tie-break which Tsonga rolled through to take a two sets to love lead in the match.

The final set played out identical to the first and Tsonga progresses into a third round meeting with either Australian wildcard James Duckworth or world number 93 Blaz Kavcic.

Tsonga said in his post match press conference that he was not happy with his performance.

“Well, I was not like in the good attitude for me. That’s it. And on the next match, like I said, I will

try to be a bit more aggressive, try to play more than my game than what I did today.”

On the soaring temperatures Tsonga said “Oh, it was hot today, of course. Was not easy because the ball was flying a lot because of the heat. You know, it’s like this. Anyway, you have an opponent, you have everything around, and you have to deal with it. That’s it.”

Tsonga reached the final of the Australian Open in 2008 losing to first time champion Novak Djokovic in four sets. When asked whether he feels closer to winning his first Grand Slam Tsonga said, “I did some good results already, but, you know, I want to join the next step.

It’s maybe to win one. Today I’m just working for that. I’m doing everything, you know, to achieve these things. So, yeah, I mean, I don’t have too much goals. The only goal is to play well in that kind of tournament.”

In other one day four men’s action Ricardas Berankis required only 77 minutes to defeat twenty-fifth seed Florian Mayer 6-2 6-3 6-1 and will play Andy Murray in the third round on Saturday.